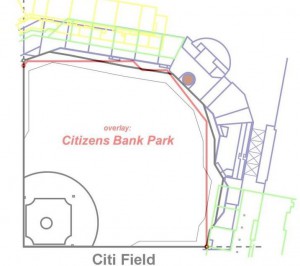 You can do the same with Great American Ballpark: 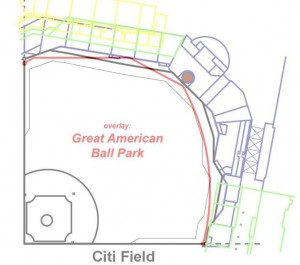 Looking at ballpark factors, Citi Field is near the bottom of the league in runs scored (27th).

However, it’s also been the 9th friendliest ballpark for home runs based on a home-to-road ratio 1.139. The problem is, the Mets haven’t been the ones hitting them. A total of 144 home runs have been hit at Citi. The Mets have hit 58 of them. They’ve hit 71 on the road.

According to ESPN’s home run tracker, the Mets have hit a lot of “just enough” home runs at home – homers that barely clear the wall. And just looking at this past road trip, the Mets benefitted by the short dimensions of Citizen’s Bank Park.

At Citi Field, Daniel Murphy and Lucas Duda have 4 “no doubt homers,” Ike Davis has 3, and David Wright has 2. Davis and Duda have the power to clear citi field fences, but are not consistent enough. Wright is consistent in every category, including homers (He’s usually in the neighborhood of a .300/.400/.500 slash line with 40 doubles and 25 homers), but doesn’t have the raw power of a Giancarlo Stanton or even a Davis or Duda.

Opponents in their home ballparks

The Mets are second in MLB in FB% at home. With the big Citi outfield, a lot of those are going for outs. As you can see, visiting players have turned a higher percentage of their fly balls into home runs (11.2 percent vs. the Mets’ 7.9 percent).

This is a big reason why the Mets won more games this year on the road than they did at home. It’s the second time since Citi opened that their home record has been worse than their road record.

That’s not to say they can’t win at home – they had winning records there in 2009 and 2010, even before the dimensions were changed. That tells us there are more variables that factor in to home/road W-L records than just home runs, including coincidence. But a team can improve their odds.

Obviously, changing Citi Field’s dimensions again not the answer. Other teams have proven they can hit home runs in Queens.

All of the above research is really just a long way of reaching an obvious conclusion: The Mets need more power. Whether it’s in the form of free-agent 20-homer guys like Shin-Soo Choo or Hunter Pence, or through a trade, they will greatly enhance their chances of winning at home (and elsewhere) if they can add more pop. Whether they can or will make significant offensive upgrades this season is unknown, and depends on many factors.

Pitching and defense are of paramount importance – they are the keys to sustained success. Adding a couple of power bats onto that foundation usually adds up to a winning formula.