Creating the next Uehara

With the Mets lagging behind the competition in every department except High-End Starting Pitching Prospects, there’s a pressing need for either creativity or dollars to make up that gap. Seeing as how the dollars don’t appear to be flowing, let’s get creative!

Every team knows that free agent stars are costly and home-grown talent is the lifeblood of a roster, but when it’s time to fill out a team by importing bullpen and bench players, organizations take many different approaches. Some look for platoon splits, others look for tools like velocity and power, and a few even follow less measured quantities like high-effort ferocity and grinding out at-bats. In each case, the goal is to find some aptitude that hasn’t yet been maximized by the player’s previous organization. This doesn’t work out all that often, as most teams value similar things, but when it does happen, the results are dramatic. See the
2012-2013 Oakland A’s, plus at least one or two key Rays players every year.

One area in which the Mets have particularly struggled during the Alderson regime is relief pitching. While the Rays were getting stellar seasons out of journeymen, minor leaguers, and failed starters, the Mets were selling low on Angel Pagan to buy high on Ramon Ramirez, winning the Frank Francisco bidding, and making desperation promotions like Robert Carson. If the Mets want to catch up to the opposition, their bullpen track record has to change. Fortunately, there’s a way to do it that not everyone has caught onto yet: find failed starting pitchers who throw strikes.

Koji Uehara joined the Orioles as a starting pitcher. He was okay, but was a bit too hittable, giving up lots of hits and homeruns. The O’s converted him to relief, and he immediately became one of the top relievers in the game (when healthy). This probably defied everyone’s expectations, but looking back, it shouldn’t have: Uehara’s arc is virtually identical to the path of Dennis Eckersley. Both were successful starting pitchers, extreme strike-throwers whose hittability eventually caught up to them as they aged. Both took their “never walk anyone” ways to the bullpen, where they threw (a) fastballs and (b) a single secondary pitch that
greatly improved once they dropped the rest of their repertoire. Eck’s slider became death to righties in a way that it never was when he started. Uehara gradually moved from throwing half splitters and half change-ups to throwing only a split, which became nastier and nastier. Both pitchers were still a bit homer-prone
after switching to relief, but their ability to prevent baserunners more than made up for it.

If this seems counter-intuitive, in an era where throwing 97 with no control seems to make a pitcher a coveted reliever, then good. If no one else sees it, the team that does can gain an advantage. While other teams are trying to grow the next Billy Wagner, the Mets can grow the next Doug Jones. Laugh at your memory of slop-tossing Doug… and then look up his stats. Of retired pitchers with more than 1000 innings pitched, the all-time K/BB list reads Curt Schilling, Pedro Martinez, Mariano Rivera, Trevor Hoffman, Doug Jones. 303 saves isn’t too shabby either.

So, who out there is a candidate to take his finesse game from mediocre starting to top-notch relieving? Here’s my list of strike-throwing starters whose value may be low enough, now or shortly, for the Mets to acquire them on the cheap:

Many of these guys are still thought of as starters, and I’m listing them only because they either are free agents or may become cheaply available if their teams give up on them. Would it shock anyone to see Blanton cut in spring training? If he is, the Mets could probably get him for very little. Let’s skip those pitchers for now, though, and focus on my top 3 candidates:

Scott Baker
Coming off Tommy John surgery, Baker threw only 45 innings last year and was pretty terrible. His career 2.1 BB/9 rate is good, but not at Eck or Uehara levels. On the plus side, he’s a free agent, should be cheap, and may be desperate enough to keep his career going that he won’t contest a move to relief.

Jeff Francis
Francis is also a free agent, and one has to think that his perceived value has dropped at he turns 33, so perhaps he’ll come cheaply. From 2010-2012, he average 1.9 BB per 9 innings as a starter. Last year, back in Colorado, his walks increased, and a move to long relief did not go well. His change-up, probably his
best pitch before 2009, hasn’t been effective in years, and his 4-seamer’s been lit up like crazy. So he’s a bit of a project. If he has a future as a precision 2-pitch short reliever, it’s probably with his sinker and curve.

Josh Tomlin
The Indians still control Tomlin, who’s arbitration-eligible for the first time in 2014. After 2012 Tommy John surgery, who knows what the Indians think of him, but his performance before the surgery was exactly the sort of thing that got Eck and Uehara sent to the bullpen: way too many HRs. So I’m guessing he’ll be cheap. Why am I interested in a guy who’s allowed 1.4 HRs per game in his career? Well, it’s simple: of all the pitchers I looked at, Tomlin’s control is the best, with a 1.7 BB/9 career mark and 0 walks in his 27 minor league innings last year. His curveball, cutter and change-up have all been good at times (though never all at once), so the Mets would need to identify which one to focus on.

None of these guys are the accomplished pitchers that Eckersley and Uehara were before they transitioned to relief. Baker and Tomlin are younger, with more injuries in their past. Francis looks ready for a change, but simply may not be all that good. It’s an underwhelming selection at first glance, but then, Uehara looked
pretty underwhelming going into 2010. Since many bullpens are cobbled together by gathering a bunch of arms and hoping one sticks, the same methods could be employed here: bring in Baker, Francis and Tomlin, hoping one of them makes it. It may not be perfect, but it may just work out better than all those other teams betting on the likes of Matt Lindstrom, Jose Veras, or Kyle Farnsworth.

Usually innovative fan proposals have about as much chance of coming true as Justin Verlander learning a knuckleball, but if we want to look for signs of hope, the Mets do have a prime example right under their noses. Carlos Torres spent 2013 throwing a lot of strikes. As a starter, he gave up (surprise, surprise) too many hard hits and homers. But in relief? A 1.47 ERA, and opponents hit .203 / .232 / .316 off him. Find a few more performances like that, and the Mets could turn a weakness into a strength, all without breaking the bank.

What do you think? Is this just the type of “moneyball” initiative Mets fans have been waiting for since Sandy Alderson, Paul DePodesta, and J.P. Ricciardi took over? If so, who do you see as “next-Uehara” candidates? Sound off in the comments.

Have you done your holiday gift shopping? Then it’s time to start wrapping the gifts. You need the stuff that goes outside the box (see what I did there?). How cool would it be if the gifts were covered in New York Mets Wrapping Paper

? This thick, high-quality paper is available from Amazon for less than ten bucks, and includes 150 square feet of wrapping. Follow the link or click on the image below. 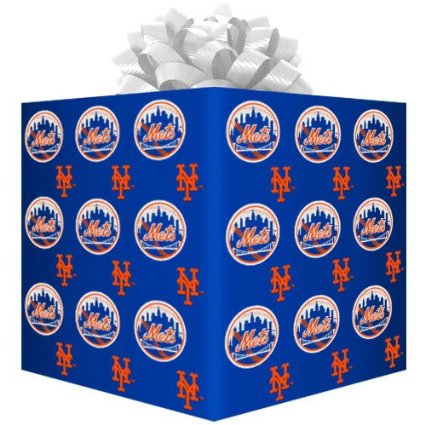