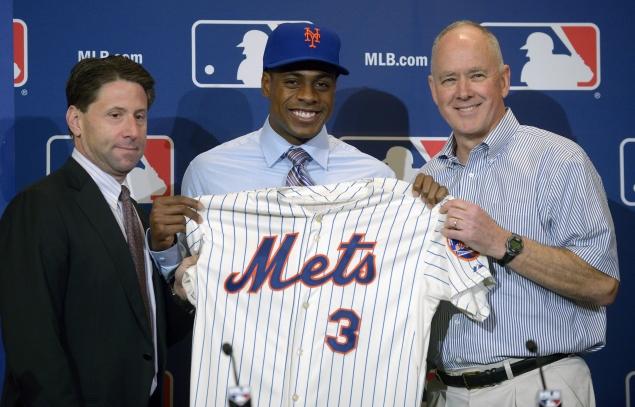 Remember when some nutty blogger went on a diatribe about how the Wilpons were limiting their budget this offseason?

Well, either the Wilpons found a new Ponzi scheme or Fred and Jeff weren’t lying (completely) when they said their financial troubles were over.

The Mets have made three significant free agent signings thus far this offseason.

The Mets are still not shelling out Robinson Cano money – that sort of thing is reserved for big media markets like Seattle – but the amount of money they’ve spent on free agents is surprising to even the most optimistic of Mets fans.

That’s $87.25 million in total contract dollars after spending $5 million last year. This kind of change in philosophy cannot be minimized.

The Wilpons, still apparently hundreds of millions of dollars in debt, have decided to budget for some players while they pay off the lenders.

The moves they’ve made up until this point are fine, but they still need a shortstop in an ideal world. At age 24, there is a chance that Ruben Tejada can return to his 2012 form when he hit .289/.333/.351. But the Mets aren’t confident that he can.

Stephen Drew can still be had for a reported 3-year, $36 million or so. Hence all the buzz about the Mets needing to clear some salary before they can sign another player.

The Mets would love to leave the winter meetings in Orlando without Ike Davis. He would cost them $3-$4 million in 2014. They would trade Daniel Murphy if the deal is right, but they’re not just going to give him away. In fact, the rumors now indicate that the Mets probably won’t trade him – but we know how fast that can change.

The Mets don’t seem to be done dealing. Alderson has been pretty clear in offseasons past when they are done. Today, he went on SNY and said 2014 is about winning. Those don’t sound like the words a man who’s done with the offseason.

Now, it’s not like the Mets went out and got the best free agents on the market. Chris Young is something of a reclamation project, and at his best, will give you 20 home runs and a ton of strikeouts. By all measurements, most of Curtis Granderson’s recent home runs would have been dingers at Citi Field, so we can probably pencil him in for 30 round-trippers (provided he doesn’t get hit in the hand with two pitches in one year as he was last year). Then there’s Bartolo Colon.

Do you give two years to a 40 year-old? As a rule, absolutely not. In this free agent market, it’s Thunderdome! Everyone’s getting too many years and too much money. Besides, Colon’s been reliable over the past three years, culminating in his 2.65 ERA in 190 innings last year for the Oakland A’s. By all measurements, he’ll be the reliable veteran innings-eater (I will resist a fat joke here) we think he can be. That second year might be a doozie, however.

So, can the Mets make one more move, preferably for a shortstop, or for a veteran arm in the bullpen? Just as the Joel Shermans of the world are ready to write them off this offseason, they seem to come through with a surprising move. So I’m sayin’ there’s a chance.

Instead of overreacting to every tiny shred of rumor that comes from Orlando, we can do our nerves some good and just wait to see what happens. No matter what the offseason holds, this has been a signal to the baseball world that the Mets are willing to spend some money to improve their ballclub.

Let’s just hope that we’re not in a situation where we’re waiting for these contracts to come off the books in the coming years. Been there, done that.