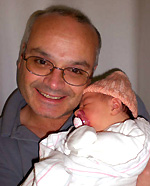 I suppose that this infant will register on the MetsToday forum with the handle “sincebirth” ?

Best wishes to “sk”, his wife, and newborn girl!

Take a look at the scouting reports at Prospect Insider on four Japanese pitchers who may be in MLB next year.

If Prospect Insider’s information is on target — and I’ve always trusted and respected Jason Churchill’s analyses in the past — then I’m going to have to say … um … pass.

Of the four — Hiroki Kuroda, Koji Uehara, Kenshin Kawakami, and Kaizumi Saitoh — Kuroda appears to have the best chance of contributing to an MLB team in 2008. However, all of them could be judged as having average to mediocre stuff, and only Kuroda comes without documented health issues.

If I saw their deliveries, I might be able to tell whether one might be able to pull an Okajima / Joe Smith on the NL for a while. But from the report, it sounds like they all throw somewhere around three-quarter.

Check out the story and post your comments below.