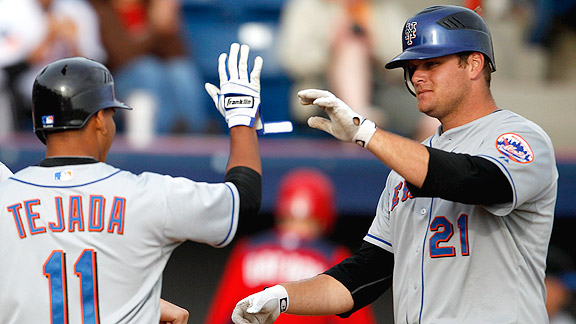 NOTE: this is a post by Kyle Schnitzer. Enjoy.

In the future, I will be doing these more in-depth. As you will notice, I am missing Double-A Binghamton. I did it on purpose because no one on the team was really have a “great week”. Their pitching struggled, as did their hitting. I look forward to future columns with you guys.

Lucas Duda, who has seen brief time in the majors, has found his way back to the top after a promotion last night. Duda has been ripping the cover off the ball in Triple-A Buffalo, batting .400 the past week. Duda also belted 3 homeruns while netting 7 RBI. In 38 games, Duda’s combined line: .302/.414/.597.

With Jason Bay struggling and now benched, Duda could not have a better opportunity to showcase himself and prove to the organization that he belongs here.

In the beginning of the season, Den Dekker was ripping apart High-A. But since coming into May, Den Dekker has