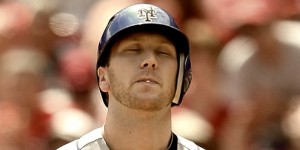 Jason Bay is moving on.

The Mets and Jason Bay have agreed to part ways.

“Jason has a tremendous work ethic. There was never any question about it,” Sandy Alderson said in a statement.  “Unfortunately, the results weren’t there and we are in a results-oriented business.  We thank Jason for his efforts and wish him well.”

Of course, the Mets will have to pay Bay’s full 2013 salary, but this is the right move.  Time to make room for the future on the field, even if room is not cleared on the ledger.

Since this game was not broadcast on a television station I could watch, and I couldn’t attend the game in person, I’m taking for granted that Howie Rose and all the tweeters weren’t lying when they said the Mets won.

For once, we witness the opposing team going in the tank.

Not even the great R.A. Dickey can halt this slide into the abyss.