Mets remain undefeated and remain at the top of the NL East standings. 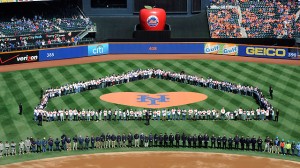 After all that Larry Jones did to the Mets in his 19-year career, the least the Mets could do in return was spoil his special day in Atlanta.

A little time away from home is all some need to get themselves feeling good again.

The ship keeps sinking, but it’s still above the Fish.