Hudson to Twins, Kennedy to Nationals

Gold Glove second baseman Orlando Hudson has signed a one-year deal with the Minnesota Twins, prompting the Nationals to sign Adam Kennedy as their second sacker.

Thus, it appears that Mets fans will endure another year of Luis Castillo at second base.

Yes, there are delusional fans still clinging to the fantasy that the Reds will trade Brandon Phillips for Omir Santos, but I wouldn’t count on it. Castillo is most likely Jose Reyes’ partner at the keystone come Opening Day.

Is it such a terrible thing? 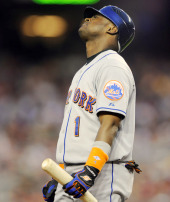 The Hot Stove Season is underway, and already we have a flurry of buzz and rumors. One whirlwind post from Adam Rubin is chock full of information (or misinformation, take your pick), which I’ll break down here. 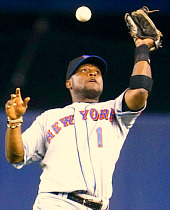 Back in November, word on the street was that Gold Glove second baseman Orlando Hudson was looking for a 5-year, $50M contract.

Had the Mets not been saddled with the three years and $18M remaining on Luis Castillo’s contract, they surely would have at least entered the bidding on Hudson — and might have signed him quickly, as they did with Francisco Rodriguez. Certainly, it helped that Hudson had made public statements that he wanted to play in New York, and would “love” to play with Jose Reyes.

My, how times have changed.

The price for Hudson has now dropped to under $5M and only one year. What hasn’t changed is the Mets are still stuck with Castillo. However, consider this: Signing Orlando Hudson right now for one year at $5M puts the Mets at $23M over the next two years for their second baseman/men. That’s less than half of what Hudson was demanding in dollars, and is a three-year commitment as opposed to a five-year one. And instead of getting just one player for the position, the Mets get two.

Granted, for the last two years of the deal the Mets have only Castillo and not Hudson. But, there’s a chance that Castillo can prove himself healthy, and become trade bait. Before, it was too much for the Mets to swallow to have two second basemen with multi-year, multi-million dollar contracts. Now, however, the idea of having Castillo and Hudson on the roster at the same time is not only palatable, it makes perfect sense.

Sure, signing Orlando Hudson to a one-year, $5M contract means that the Mets have a very, very expensive backup second baseman in Luis Castillo. But when you look at the second base position as a budget unto itself, spending a total of $11M for one year to have Hudson and Castillo man the position … well, what are the Mets waiting for?

Now, if the Mets insist they don’t have another $5M to dish out for Orlando Hudson (but have more than twice that amount for an assortment of AAAA fodder), we may as well all pack it in.