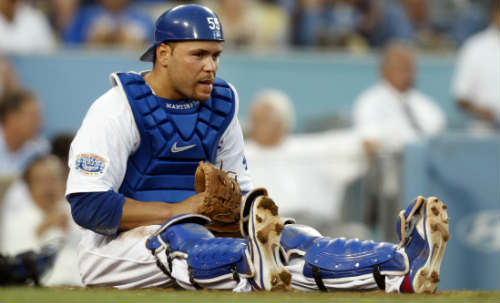 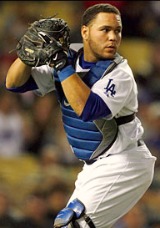 In case you haven’t heard, the Dodgers have non-tendered catcher Russell Martin, making him a free agent.

Immediately, Mets fans might think, “hey, this guy is a perfect fit for us”. After all, he is a 27-year-old, righthanded-hitting catcher with promising offensive skills who can also play third base and probably the outfield if necessary. In fact, Dodgers GM Ned Colletti suggested that he could also play second base.

However, Martin is also coming off of a major hip injury that ended his 2010 season in early August. Additionally, his offensive performance fell off drastically since 2008 — particularly in terms of power — and has been on a steady decline since hitting 19 HRs and posting an .843 OPS in 2007.

For the record, I’ve always been a big fan of Martin — so much so that I suggested in October 2008 that the Mets acquire him in a deal for Carlos Beltran (funny, I figured Beltran’s value was peaking back then).

I still would love to see Martin come to the Mets, but it appears to be unlikely — mainly because there are a number of better, deeper-pocketed teams already clamoring for his services. For one, the Dodgers are still negotiating with Martin, and the Yankees, Red Sox, and Rockies are all reportedly bidding for his services as well. Unfortunately, I don’t see the Mets competing with those teams from a financial standpoint, and I doubt that Martin would choose the rebuilding Mets over clubs that have a more more realistic shot at the 2011 playoffs.

I’m not surprised LA brought him back, considering that he went on a tear after leaving Flushing. The dollar figure, though, seems a bit high for a 35-year-old catcher with fading defensive skills and a career .284 OBP. I guess, though, teams must pay a premium for a catcher who can hit as many as 17 homeruns. Makes one wonder why these same teams regularly move young backstops to another position the moment they show some ability to swing the bat.

The signing of Barajas also had some influence on the Dodgers’ decision to non-tender Russell Martin, who is coming off a major hip injury.

Hi. My name is John. I enjoy eating pizza and yelling at parked cars.

Joe asked me to step in here and write something, so here goes… I’m going to rank the top 5 players at each position in the NL and the top 5 in the NL East. These offensive rankings are both for the season and for fantasy baseball – because that’s just how I roll.

Catchers… Always a crapshoot and usually a big disappointment if you draft them too high. My strategy is to draft Gary Carter and live in a nostalgic fantasy world while everyone else’s catchers are on the DL or batting .220 due to sprained fingers and bad knees. When in doubt, think about ’86. Bring on the rankings:

Sleeper: Keep an eye on Pablo Sandoval. He has an undisciplined approach at the plate, but he should get ABs and he should have or attain 1B/3B/C eligibility in most fantasy leagues.

After Brian McCann, things fall off sharply. If you take any other NL East catchers in your fantasy draft, you should probably just forget about your team, because you’re in serious trouble. There’s always fantasy NASCAR…

Sleeper: Keep an eye on Ronny Paulino. He could be out of baseball and working in a car wash by mid-August, but he could also be hitting .270-8-55 by then too.

UPDATE: 3/26/09 – I have updated Ramon Castro’s projection. Thanks to Isuzudude for pointing out my projection was incorrect based on probable playing time.