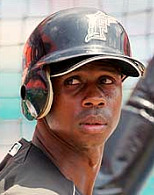 As MetsToday reader isuzudude points out, we discussed a Castillo – Pierre trade right here last winter. Though, my proposal — which was just for fun — was a bit more elaborate, and included Carlos Beltran and Russell Martin, among others. Funny though, how the more things change, the more they stay the same.

But how do you feel about such a swap now?

Juan Pierre is essentially the same player as Luis Castillo, except he hits from only one side and plays the outfield instead of 2B. Also, his ability to get on base is directly tied to his batting average, and he’s a fairly aggressive hitter. That said, he’s probably a better fit in the #8 spot in the order than at the top.

At first, swapping Castillo for Pierre doesn’t seem to make much sense, since the Mets need to find a power bat, but the more I think about it, the more it could work — IF the Mets made other moves to bring in sluggers.

First, they would absolutely have to get a big-time power bat for 1B. We’re talking Prince Fielder, Adam Dunn, Adrian Gonzalez, monster-type power. No matter which way you slice it, the Mets need a cleanup hitter for 2010, and they have either LF or 1B open. You can live with a Pierre / Angel Pagan platoon in LF if you have a monster at 1B AND you get a combination of offense and defense at 2B. But who would be the man for 2B?

A lot of fans are clamoring for Orlando Hudson. That could work, as could the other suggestions of Placido Polanco or Adam Kennedy that are making the rounds. The Mets must get better defense at 2B, and ideally, that second baseman is someone who can hit at the top of the lineup, behind Jose Reyes. Hudson and Polanco both fit that mold, and Kennedy might. I’ve always liked Kennedy, but he’s been wildly inconsistent from year to year with the bat, and though always been highly regarded with the glove, his defensive skills are slipping with age. Of these three, Polanco most likely has the edge on defense — but you never know, since Polanco is not getting any younger, either. Next year, all three could be at the same level defensively.

What also could work is getting that monster slugger for 1B and bringing in Dan Uggla to play 2B. With the slugger and the 25-30 bombs Uggla will provide, you can absolutely live with Juan Pierre in LF and the 8 hole.

One more idea is to sign a RH-hitter left fielder with some pop, to either platoon with Pierre or compete for the starting job. Fan favorite Xavier Nady comes to mind.

And we likely will see a new catcher in 2010. If it’s Bengie Molina or Ramon Hernandez, there’s your #7 hitter in front of Pierre.

No matter what, though, the Mets have to find that cleanup hitter — it’s the key to everything in 2010.

Back A Short Hot Stove Season?
Next Josh Thole To Return Early?