We only get to do this every 4 years or so: The Leap Year Edition of the Blog Roundup!  As a bonus, Spring Training is well underway on the 29th day of February, and there’s already much to talk about.

Here’s an extra day of Blogs:

That’s all for today.  Stay tuned to Mets Today for coverage of your favorite team 366 days a year!

According to Mike Puma:

A Mets official spoke with Ivan Rodriguez as recently as 10 days ago, and the team hasn’t ruled out the possibility of signing Rodriguez as a backup to Josh Thole. But before the Mets spend the roughly $2 million they have remaining in the budget, their priority is to ensure Johan Santana is healthy. Otherwise, the remaining money would be allocated toward another starting pitcher. The Mets official told Rodriguez to “stay in shape,” because anything can still happen.

I feel like there is a Pudge-to-Mets rumor right after the end of every season and right before the beginning of every season; it’s like a bookend. Could it really happen this time?

In past seasons, signing Ivan Rodriguez would have made plenty of sense, because the Mets could have used his veteran experience and leadership behind the plate in years when they were gunning for the postseason. Now, I’m not so sure why the Mets would add him.

Perhaps Pudge fits in as a mentor, both to Josh Thole and to the youngsters on the Mets’ pitching staff. The Thole idea holds water, but as for the latter, the Mets’ Opening Day roster doesn’t project to have many “young” pitchers. Jonathon Niese, Dillon Gee, and Pedro Beato are all the youngest, at 25 years old (and Beato may start the year in AAA), so I’m not sure the “teaching the youngsters” thing flies.

On the other hand, I wonder if the Mets bring in Pudge because they don’t have confidence in Thole to properly handle a pitching staff. If that’s the case, well, hmm … if Thole isn’t going to be given the chance to learn this year, then he likely never will.

One more possibility: the Mets believe that there’s still enough left in Pudge to make him a worthwhile chip at the trading deadline. Who knows? If he goes on a hot streak in June, and a contender’s starting catcher goes down with injury, Pudge could command interest.

My best guess is that the Mets would bring in Ivan Rodriguez to both teach Thole and take some of the load off of him. Mike Nickeas appears to be a solid defensive catcher who pitchers like to work with, but Nickeas doesn’t have the same aura or experience that Pudge does — and therefore isn’t as valuable as Pudge in terms of mentoring Josh Thole.

What do you think? Should the Mets bring in Pudge? Why or why not? Answer in the comments.

Get Single Game Mets Tickets Before Everyone Else

Want to be the first one on your block to purchase single-game Mets tickets?

A limited number of tickets for Opening Day (April 5 vs. Braves) and the Subway Series (June 22, 23 & 24) games will be available in this Presale. Each ticket purchaser is limited to a maximum of eight tickets per game, subject to availability.

Again, this offer begins at 10:00 a.m. Wednesday and continues through Thursday night.

Has David Wright finally grown a backbone, and discovered a voice? Is he now ready to speak his mind, rather than provide diplomatic canned quotes? Are we going to find out who David Wright really is this year?

COO Jeff Wilpon on Monday presented each member of the team with an orange T-shirt depicting the “U” symbol from the 1960’s TV cartoon “Underdog.” While most Mets, including manager Terry Collins, appeared to enjoy the stunt, Wright wasn’t thrilled.

Mr. Wright makes valid points. He also has blatantly poo-pooed an ill-conceived motivational tactic by his boss. The idea of the “Underdog” T-shirt in and of itself may not have been ill-conceived, but the fact it came from Jeff Wilpon destroyed any hope of it having an impact on the players. Stuff like that has to come from the players themselves — not from an outsider. And yes, the COO of a baseball team is an outsider. Sorry, Jeff, but that’s the way baseball teams work — you’re not “one of the guys”, you’re the boss, and therefore whatever you provide them as “encouragement” is seen as something forced, something they have to do.

I wonder, Will Wright make more comments like this going forward? In other words, is he coming out of his “good boy” shell to say what he really feels, rather than try to fulfill the image of The Face of the Franchise? Could this change in behavior be in any way related to the rumors that Wright will be traded by July 31st, and/or the Mets’ inaction in regard to initiating a contract extension for Wright?

Stay tuned, this could turn into an (under)dogfight. 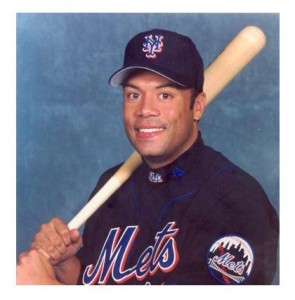 Jason Bay Back to Batting Basics

From Anthony DiComo on Mets.com, I’ve ripped off several quotes regarding Jason Bay, what has happened with him the last two years, and what he’s planning to do this spring:

Why is Johan Santana Long Tossing?

Ever since Johan Santana arrived in Port St. Lucie, there have have been reports of his “long toss” sessions — where he throws at a distance up to 175 feet.

Why, exactly, is Johan Santana heaving a baseball almost three times the distance between the pitching rubber and home plate?

Pitchers and catchers reported to spring training on February 20th. Position players are expected to report to Port St. Lucie by the end of today, February 25th.

Ruben Tejada is due to arrive in Miami at 3 p.m. today; I’m not sure how long it will take for him to clear customs and travel to Port St. Lucie but I’m guessing that once he gets there, he won’t have time to do anything other than show up and be scolded by Collins.

This is what Collins said publicly when he found out Tejada would not be arriving early: