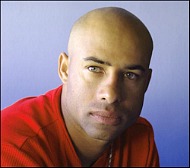 He’s started a World Series game at Yankee Stadium, once dissed Miss Iowa and is a published author and poet. He is Miguel Batista and if the Mets at all want to add a little interest to the remainder of another season of broken dreams, they should call him up from Buffalo to take the rotation spot for the recently DL’d Jonathon Niese.

No, Batista won’t log many quality innings, nor at age 40, is he auditioning for a spot in next year’s rotation. What he might bring is a little quirkiness and character to a team that has been beaten down recently by injuries, bullpen meltdowns and mental mistakes. Batista is the author a 2007 thriller called The Avenger of Blood

, a novel about a serial killer. He is also known for his love of philosophy and poetry—imagine a combined shut out by Batista and R.A. Dickey, now there would be some post game quotes! If nothing else, the Mets could urge him to slight other beauty queens the way he did Katherine Connors — then reigning Miss Iowa — back in 2010. (For those who have forgotten, Batista was booed when he replaced Nats phenom Steven Strasburg as a starting pitcher last year when Strasburg turned up injured. Asked later if it bothered him, Batista replied “no, I understand how the fans felt. It’s like going to see Miss Universe and getting Miss Iowa.” To which Connors replied, “I can pitch but I’d like to see Batista walk down a runway in a bathing suit and high heels.” They eventually made up and Connors was invited to throw out the first pitch at a later Nats game). Perhaps a bevy of beauty queens tossing out the first pitch for the remainder of the home schedule might bump attendance up slightly and make Jose Reyes more affordable to the Mets next year. If not, well there’s always Pat Misch.

The injuries to Niese and Scott Hairston might mean an early jump on the expected September call ups. Mike Nickeas has already been activated to replace Niese on the roster. In addition to Batista and Misch, some other names include Zach Lutz, Chris Schwinden and Jordanny Valdespin. As has been reported elsewhere, don’t expect Matt Harvey, Jeurys Famila or Reese Havens.