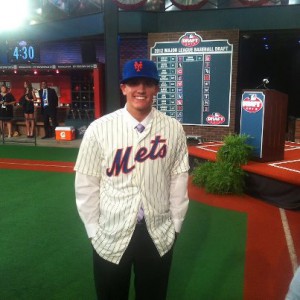 He’s made mistakes that don’t always translate into errors. Last night’s game against the Yankees is a prime example. With a runner on first in the eighth inning, Vernon Wells hit a ground ball up the middle. Tejada and Murphy converged on it, and Ruben, who appeared to have the best chance to reach it, backed off.

Miscommunication between both middle infielders? Perhaps. But the shortstop has to be the aggressor in that situation since his momentum is already moving him toward first base. If Murphy fields that ball, he’d have to try to throw to first with his momentum carrying him toward left field.

The Mets were lucky that didn’t result in a run.

So what should the Mets do with the 23 year-old? He’s shown too much ability to give up on entirely, yet he’s turning into a liability this year. Maybe it’s time to have the “Ike Davis Conversation” about Tejada. Should the team send him out to Las Vegas to try to right his offensive and defensive problems there? Or should they look upon 2013 as a rebuilding year and chance for Tejada to experience his growing pains in the big leagues?

If you’re going to send Tejada down, who replaces him at shortstop? The organizational shortstop options at the highest levels are alarmingly thin.

He’s on the major league roster, he’s played short before, but doesn’t have the range to succeed there on a daily basis. His bat has always been good for the Mets off the bench, but his weaknesses tend to get exposed when he plays on a regular basis. However, he would be an offensive upgrade over Tejada at this moment.

Quintanilla is enjoying a great season in Las Vegas, perhaps with the help of a little PCL inflation. He’s batting .328/.415/.480. He’s a lifetime .220/.279/.302 hitter in the major leagues, but we’ve seen he can handle a bat in his stint with the Mets in 2012. We also know he’s a competent and experienced defender. If the Mets were to recall him to the bigs, they wouldn’t be able to send him back down, since he has no options – a problem they had last year, when he ended up finishing the season on the Orioles.

Flores is currently being groomed as a second baseman. He started his minor league career as a shortstop, but the Mets feel is body type and mobility now preclude him from that position.

Tovar profiles as a classic light-hitting fielding specialist. He still needs some time to develop, but the Mets feel his glove is a plus major league tool right now. He’s not going to hit at the major league level (yet), but he may be the best fielding option the team has – if the team was willing to jump him to the majors this year, something that they are unlikely to do.

Gavin was the Mets number one draft pick last year, and rated by many as the team’s best shortstop prospect. Unless the Mets front office can build a time machine (Paul DePodesta must be working on something like that, right?) and bring him back from the year 2016, he’s not an option currently.

There’s always a possibility that the team will look outside the organization, but only for a bargain-basement option off the waiver wire, or a replacement-level player in a minor trade.

So, it looks like the Mets are likely in a position to stick with Tejada for now. There’s really no one waiting in the wings who would constitute a significant upgrade.

As a result, he’ll have to plow through his growing pains at the major league level. And we’ll have to experience the pain with him.