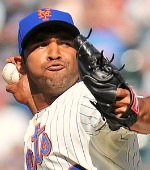 The Pittsburgh Tribune-Review is reporting that the Pirates have signed former Mets pitcher Fernando Nieve to a minor-league deal.

Personally, I’m a bit sad to see him go as I believe he has potential as either a middle reliever or swing man. But considering his poor performance both at the MLB level and in AAA after being abused by Jerry Manuel in the early spring, and the fact that there is a completely new management regime in place, it’s probably best for Nieve to start over with a different organization.

You can read my 2010 analysis of Fernando Nieve here.

The Pirates also signed Dusty Brown (formerly of the Red Sox) and former Indians infielder Andy Marte, who never lived up the billing of top prospect in baseball.

In other news coming out of Pittsburgh, Andy LaRoche and Delwyn Young both elected to become free agents. Like Marte, LaRoche never fulfilled the promise he showed as a hotshot prospect and is now 27 years old. Young is somewhat intriguing — a 28-year-old switch-hitter with some pop and experience as both an outfielder and second baseman. However I don’t believe he is strong enough defensively at 2B to be considered for an everyday spot; he could, though, possibly be part of a platoon and/or be a super-sub.