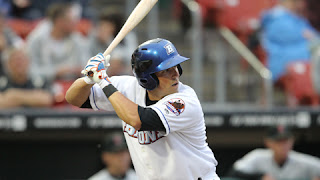 If the Mets were to part with Wright, Zach Lutz would be the first one to fill the hole because of his experience. The 25-year-old would have been in Queens sometime this year if he didn’t get hurt midway through the Triple-A Buffalo season. Prior to the injury, Lutz was tearing up International League pitching, batting .295 with 11 homeruns and 31 RBI. Those numbers look very good for an MLB-ready talent like Lutz, however he strikes out too much, conjuring thoughts of Casey McGehee or Mark Reynolds. In 220 at-bats, Lutz whiffed 70 times, while accumulating just 27 walks.

Surprisingly, Lutz hits for average, as he’s never hit below .275 in his 5 years in the minors. At worst, he becomes a Mike Hessman kind of player, minus the hype that Hessman had as a prospect. At best, he’s a serviceable third basemen. Because of his injury, he’ll likely start off in Buffalo again and will definitely get a taste sometime during the season.

Rankings 1 and 2 is a crapshoot, it could be either player. I’ve stuck Aderlin Rodriguez here based on the fact that his 2011 campaign was a letdown in many respects. The power numbers are something to drool over: 17 homeruns in Class A Savannah. His average is something else, batting .221 while striking out 106 times in 516 at-bats.

The one thing fans must love is the power. It’s been a long time since a lower level prospect in the Mets system has displayed this kind of pop in his bat. However, there’s a lot of room for improvement. A .221 average at low-A is frightening and it is something to think about going into next season. Not to mention, Rodriguez committed 44 errors at third. A position change could be in his future if he cannot solve his fielding troubles.

With many Dominican prospects, it takes time to become comfortable and adjust to the role of a full-time baseball player. He’ll be in Savannah again next season to adjust to the pitching and cut down his swing to make him a complete player. He is one of the more intriguing prospects in the Mets system if he can get it all together soon.

Four months older than Rodriguez and just a bit more intriguing is Jefry Marte. Unlike Rodriguez, Marte has not demonstrated power, hitting 7 homeruns in his 2011 St. Lucie campaign. Unlike Rodriguez, draws walks at the plate, walking 41 times while striking out 86 times.

Like Rodriguez, a concern is his lack of average, .248. If power never develops, he’s a bench player. Marte brought a new element to his game, swiping 14 bags in 16 attempts. That speed reminds me of what David Wright does on the base paths. The speed element of Marte’s game is crucial and in my opinion, it’s what puts him above Rodriguez.

Marte is currently playing in the Arizona Fall League, one of the prestigious off-season leagues for top prospects, for the Peoria Javelinas. In 13 games, he’s hitting .333 with 3 homeruns and 14 RBI. I really do not like to consider these stats as anything because the Arizona air makes the AFL a hitter-dominated league. But it’s a sign of promise and it’s definitely a positive for Marte to get more reps.

It’s hard to predict where Marte will fall in 2012. The Mets are obviously aggressive with him, hence Marte playing in the AFL. Should he repeat a year in St. Lucie? Or should they push him on the fast track and let him find his way? My guess is St. Lucie, so he gets more comfortable — like Rodriguez repeating in Savannah. But as a Mets fan, I look forward to watching both Rodriguez and Marte battle it out throughout the minors.

What do you guys think? Are you comfortable with giving up David Wright for prospects? Is there an answer in the minors?

Back Spilled Milk Part 2: Missed Trades Since 1986
Next Best Comments This Week