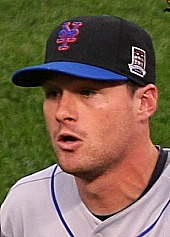 But even if Daniel Murphy did resemble “Mex” in the field, 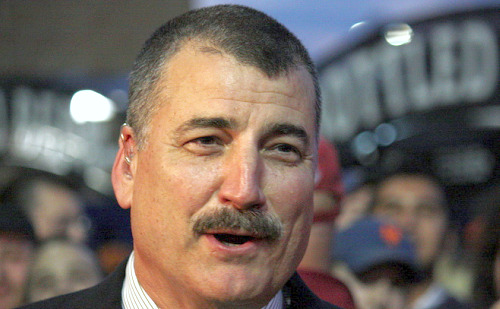 Mike Pelfrey turned in an outstanding performance against the Astros in the most recently televised spring training game, showing exactly why many people are looking at him as the Mets’ #2 starter.

The two things that most impressed me about Pelfrey in this particular outing were his ability to change speeds and his supreme confidence. This time last year, Pelfrey was pitching scared, thinking too much, and picking around the plate. In this game, his manner and body language oozed with confidence, and he looked like he had a plan. The curveball was dropping nicely at an 11-to-5 angle and staying around the strike zone, at a 75-MPH speed — which maybe is a little too slow, but hey, he’s still shaking the dust off it. Pelf also started to hammer his sinker in on the hands of lefthanded hitters — a new concept, since he has always in the past tended to stay on the third-base side of the plate with that pitch. A number of pundits are already getting silly about the “new” pitch (the NY Times coined it a “front-door sinker”), but really it’s the same sinker he’s always thrown, but he’s now spotting it on the other side of the plate. I’m liking it.

In addition to Pelfrey’s performance, Nick Evans continues to make roster decisions difficult for manager Jerry Manuel. Evans is driving the ball with power, spraying to all fields, and showing patience at the plate. His fielding is still a bit suspect, but you can’t knock him for his effort — he’s a hustler. Taken out of the optimism of Port St. Lucie, Evans looks like he could evolve into a “mistake hitter” — the kind of guy who can jack a pitcher’s mistake over the fence. At the same time, he has some holes in his swing and will get overmatched by hard fastballs inside. I love the kid, and am rooting for him, but it’s going to be tough to carry him on a roster that includes 11-12 pitchers and at least one backup catcher. Those 3-4 bench players have to be versatile, and bring more than one tool to the table. Alex Cora and Fernando Tatis have two of those spots sewn up, and you have to figure at least one other spot goes to either one of the defensive-minded outfielders in camp, or Marlon Anderson (another guy who can play multiple positions). Evans’ glove just isn’t strong enough at either 1B or in the OF, and he doesn’t have the speed of a pinch-runner, so he either has to win a platoon job (not happening) or hope for an injury, to go north in April.

Speaking of Tatis, a strange comment by Keith Hernandez during the SNY broadcast of Thursday’s game, in regard to how Tatis’ versatility can be used to keep people fresh:

For the record, Keith, here are some of the “regulars”, and their games played in 2008:

Of course, the other positions — LF, RF, 2B — were originally supposed to be manned by players who ended up on the DL for extensive periods (Moises Alou, Ryan Church, and Luis Castillo). So other than Schneider, who missed games due to minor injuries eight different times during the season, the “regulars” certainly didn’t get rest. Manuel TALKED about resting the regulars when he took over the club last June, but never actually FOLLOWED THROUGH with that plan. Funny though, how some people’s words speak louder than actions.