MetsBlog isn’t the only website with video coverage of Mets spring training … we have some of our own available below, which is purportedly recorded from the trainer’s room at Tradition Field in Port St. Lucie.

I say “purportedly” because the person with the camera isn’t exactly an expert on baseball, nor even a Mets fan. But he was the best cameraman we could hire on the meager MetsToday budget … and, well, you get what you pay for.

The quality isn’t great, so it’s hard to tell who is getting the back rub, but the videographer claims it’s “one of the Mets catchers” (a good bet, considering that half the players in camp don the tools of ignorance).

My money is on Rod Barajas or Henry Blanco … though, for all I know this is re-used video of Ramon Castro from last spring.

If you can positively identify exactly who this is, please let us know in the comments. 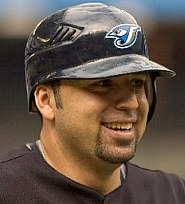 Yes, the Mets have signed another catcher. And this one is the best of the bunch.

Unfortunately, that’s not saying much.

Rod Barajas is an average to slightly above-average defender and a terrible offensive player with one tool: the ability to hit the ball over fences. Don’t get too excited, though, as it’s not as though Barajas is Babe Ruth. By “the ability to the ball over fences”, I mean he has more power than Luis Castillo. Over the course of 450-500 at-bats, playing half of his games in Citi Field, he might hit 10-15 HR.

However, he’ll also hit .230 (.240 at best) and post an OBP around .250 – .280. He won’t score many runs. His RBI total will be dependent on his homer total and his RBI opportunities. Essentially, he is a poor man’s Bengie Molina — and most of the statheads were very much against a Molina signing. Though, Bengie is not a good comparison, since Barajas has been more of a backup catcher most of his career. Considering that, Barajas is most similar to Ramon Castro. Before you say “a more durable version of Ramon Castro”, I will point out that Barajas has endured chronic hamstring, groin, and back issues — symbols of someone who has a problem with flexibility and is perpetually overweight. So again, Barajas is essentially Ramon Castro — minus the jokes and personality.

We’ll get back to his defense, since that’s what the Mets’ spin doctors want us to focus on. You’ll hear nonsense such as “Barajas is an excellent defensive catcher”. He’s not. He’s “excellent” compared to Josh Thole. Compared to all other MLB backstops, he’s about average. His caught-stealing percentage has been consistently around 34% his entire career, which is much better than Mike Piazza, and a few ticks better than the average. However, did you know that the Mets catchers in 2009 had a caught-stealing percentage of 34%? Interesting, eh?

I would say that, defensively, again, Ramon Castro is a fair comp. Is Barajas better than Brian Schneider? Tough to say, as they’re pretty close. If it came right down to it I’d take Schneider, who I think is a better overall receiver and a bit better when it comes to throwing out runners. Offensively, Schneider doesn’t have the pop, but he’ll get on base at least 50-60% more often. Barajas’ power is his singular tool, and even that is deceptive. Of his 19 HR in 2009, nearly one-third (6 to be exact) came in Fenway Park, Citizen’s Bank Park, and The Ballpark at Arlington — so take that info as you will. Additionally, he’s an incredibly streaky hitter, as evidenced by his .300 average in April last year, and .150 average in September. Also speaking to the streakiness, 7 of those 19 dingers came in August — 6 of those in a 10-game stretch. That hot April included 7 of his 19 doubles. Most scouts agree that in addition to being streaky, Barajas’ main problem offensively is that his performance drops considerably the more he’s exposed. Again, he’s sounding a lot like Castro, isn’t he?

The sad thing about this? Upon his arrival on Tuesday, Rod Barajas will be the best catcher in camp, and the best on the Mets’ 40-man roster.

But don’t let that fact depress you, since the catching position is unimportant and a non-factor on most teams. Though, you could also point out that “most teams” don’t make the postseason.