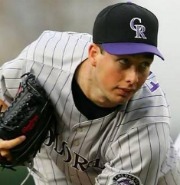 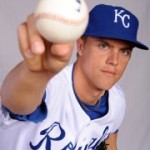 After being DFA’d last week, LHP Nate Robertson has been outright released by the Florida Marlins.

Robertson had a 5.47 ERA and 1.5 WHIP through 100 IP this year for the Fish, and was designated for assignment after allowing 8 runs in 5 innings against the Rockies last Tuesday.

Considering the Mets’ lack of pitching depth, and need for a lefthander in particular, it may not be the worst idea to take a flyer on Robertson. He can’t be any worse than Oliver Perez.

Ah, but there’s the rub — Perez will not agree to be demoted, and is a permanent useless fixture on the roster. Oh well.

In related news, Gil Meche may need shoulder surgery, according to a tweet by Ed Price. Meche gave up 7 runs in 4 innings in a rehab assignment in the minors last night.

You may have read about the rumors that the Mets and Royals were talking trade, with Meche and Perez as names possibly mentioned. If indeed they were able to trade Ollie for Meche, it would be a rare case where I wouldn’t fault the Mets for obtaining an already-injured pitcher … such a move would actually be to their advantage by freeing up a roster spot.

MLB.com is reporting that the Royals have signed 19-year-old righthanded pitcher Noel Arguelles to a five-year, $7M Major League contract.

Despite his young age, the Cuban defector has extensive international experience and is highly touted as.

According to Royals GM Dayton Moore:

“He’s 6-4, 225 and very athletic, very competitive,” Moore said. “He’s got an above-average fastball and changeup, a curveball and slider. He’s certainly a top pick if he was in the Draft this year.”

“We feel he’ll be a top-of-the-rotation pitcher at some point in his career,” Moore said.

It didn’t appear that the Mets were ever a major player in signing Arguelles, which is too bad considering the final price tag. The dollars seem relatively cheap for a young pitcher with his skill set, and the only downside is that KC will have to carry him on their 40-man roster regardless of whether he’s ready for the bigs (considering the Mets have wasted 40-man spots on people like Robinson Cancel in the past, that wouldn’t have been a major issue). Though, New York may not have been the best place for Arguelles to develop. The spotlight would be over him from his first pitch in A ball, and the pressure to promote him would have been incessant — similar to when Mike Pelfrey was drafted. With Kansas City Arguelles will have the time to develop at his pace, in a relaxed atmosphere.