Kyle Schnitzer's biggest memory as a Mets fan is when Carlos Beltran went down on strike 3 against Adam Wainwright in game 7 of the NLCS. Since then, he hasn't expected much from the Mets. The new regime gives him hope. When he's not writing here, he's writing somewhere else, bussing tables, tweeting, or riding his bike. Follow him on Twitter: @dakyleschnitzer

Browsing All Posts By Kyle Schnitzer

The Fantasy 3-Way Deal: No Gio for Metsies

Amid these new rumors circulating around New York Mets and Oakland A’s left-handed starter Gio Gonzalez; I have cultivated a 3-way trade proposal.

Thursday night, Ken Rosenthal reported that the Mets are in on the 25-year-old left-hander. Along with the Mets, the Seattle Mariners, Miami Marlins (they should just go away now), Cincinnati Reds, Boston Red Sox, and the Texas Rangers all have interest in the southpaw.

So it comes as a surprise that the Mets are even talking to any teams at this point; let alone going after a high-profile lefthander.

But my judgment says the Mets are nothing going strictly for Gio Gonzalez. Gonzalez would be a nice fit in a rotation but he’s a now pitcher. The Mets aren’t a “now” team. They are a later team. I think everyone has come to terms that the Mets will not be competitive for a few years.

So here’s a 3-way trade scenario I made up. This involves the Toronto Blue Jays (Note: I am not a general manager, nor am I a business major. I know if Blue Jay fans read this they’ll go after my neck but I felt that this is how this deal gets done.):

In this trade, the Blue Jays receive an already proven pitcher. In the American League East, you need solid pitching. We already know that the Blue Jays won the bidding rights for Japanese stud Yu Darvish. However, the Jays lack left-handed starters (and effective ones). If you put Rickey Romero and Gonzalez in a rotation with Darvish*, Brandon Morrow, and the 5th spot being up for grabs; you have a rotation that is ready to compete. The Blue Jays are a now team. GM Alex Anthopoulos has shown he is ready to make the steps to the next level. The Jays recently switched their logos to the old Blue Jay, with future star Brett Lawrie saying, “I feel that this year is our year” (Can’t find the video…grr..really cool video though). The Blue Jays believe they can compete and with the acquisitions of Darvish* and Gonzalez, they would be a force to reckon with, including with the new wild card system.

From the Oakland A’s perspective, Billy Beane has made it known: he wants prospects (like usual). The A’s receive an already proven young left-handed pitcher, Jon Niese, who is under club control for another four years. That’s four years for A’s to ponder what they want to do with Niese. Niese can blossom into the pitcher we want to see. Maybe he’ll find himself somewhere else?

Rumor has it that the A’s want a “future third-basemen”. Slot in Wilmer Flores. When you think future, you think of 2 years (even though I don’t know if the A’s will ever be competitive again). Wilmer Flores is not going to play in New York. While many are still hyping him up, he just has not performed well enough for me to remain drooling over. He is expendable, in my opinion. Now you throw in an MLB-ready talent like right-handed pitcher Henderson Alvarez, you might have a deal. Alvarez dazzled as a 21-year-old in AA, posting a 2.86 ERA with am 1.11 WHIP. He was called up in August by the Jays and went 1-3 with a 3.53 ERA in 10 starts.

Finally, the Mets haul. The Mets would receive another left-handed pitcher in Brett Cecil. A former first-round selection out of Maryland, Cecil has pitched well in the AL East. While his numbers aren’t exactly standout numbers, Cecil sits in a low to mid 90s. He has a somewhat lazy delivery but gets some nice bit off his fastball. In 2010, he had a 2.6 WAR, however it dropped to 0.4 in 2011, mainly because he was wild. I’ve always been a fan of Cecil ever since he was drafted. I felt the Jays rushed him a bit but he’s starting to find himself. I feel that his biggest weakness is pitching in the American League East and a change of scenery would be best for him.

And here’s where the deal gets sweet. The Mets would receive Blue Jays prized prospect Travis d’Arnaud. d’Arnaud was originally drafted in 2007 by the Philadelphia Phillies. How sweet would it be to have him as the Mets back stop for years to come?

Rated the 36th best prospect in baseball according to Baseball America, d’Arnaud did not disappoint in 2011. The 22-year-old hit .311 with 21 home runs and 78 runs batted in at Double-A New Hampshire. The only concerns are over his glove and if he can make the step to being an all around catcher (aka: Matt Wieters). But still, he’s a catcher of the future. Not Josh Thole. And by a catcher of the future, think a REALLY, REALLY, REALLY good catcher!

The Mets also receive a pitcher! A possible clone of Jon Niese in Griffin Murphy. The Jays draftEd High-school heavy in the past two drafts, which is why some guys get lost in their system, like Murphy. Murphy was selected in the 2nd round in 2010 and pitched so-so in Rookie League. He walked 16 in 41 innings. He has to have more control since he really isn’t a power lefty. His frame (6’3″ 200) is intriguing because if he could fill it out, say gain another 15 pounds, he might get the velocity that is missing. Clearly, I used him in this proposal as a throw in player. Sure you could pray for a Justin Nicolino or a Deck McGuire, but the Jays are parting with d’Arnaud and Alvarez.

So tell me, what would you give up for Jon Niese? If you were GM Sandy Alderson, would you entertain this offer? Is it too much? Or just right?

A Look into the Future: Top Shortstop Prospects

The ground is full of dirty,

dirt that is full of memories.

Do you know how many played on this dirt before?

Maybe one day I can play on the dirt.

Short poems can explain a lot. If this poorly constructed poem did not inform you of what the article will be about, it is about the New York Mets infield prospects.

Before I try to convince you that these few will wear the blue and orange in the coming years, let me advise you, I am no expert. I do not hold a degree in predicting where and how a prospects career will play out. Maybe player X becomes the next big shot (cough … Nelson Cruz). Maybe player Y becomes a huge bust (cough … Fernando Martinez). But as fans, we love reading about the future. We hope that these teenagers and young adults can bring us something to be proud about.

For now, let’s focus on the left side of the infield. If you think back 3 years ago, you’d be sold that David Wright and Jose Reyes would be the face of the franchise for 10 years to come. Now to the present, David Wright is constantly being rumored around the trading market and as of right now, Jose Reyes is a free agent.

Ruben Tejada is nice shortstop who could blossom into an okay hitter, but he’s not Jose Reyes. Quite frankly, I do not think there will be another Jose Reyes in baseball, in the sense of what he brings to the plate each time he steps up. As it looks right now, the Mets answer might not be in their farm system to replace Jose Reyes. Sure Ruben Tejada could fit, but fans will just complain about his production. Hopefully I am wrong, but here’s my best shot at providing some insight on the shortstops of the future. 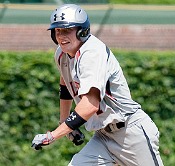 Down on the Farm: Binghamton

So my first day on the farm didn’t go as expected. Torrential rains delayed my pursuit of finding that gem in the weeds. So on Monday (for now), I am scheduled to have my first day as a farmhand.

So let’s dig up the interesting character named Matt den Dekker. A 5th round selection out of Florida in 2010, Den Dekker

Down on the Farm: St. Lucie Mets

With summer closing and my second year of college approaching, I picked up another job. This job is on a farm. The description says I must weed and harvest. So I’ll do the same with the Mets, as I take a look “on the farm” at some of the Mets prospects (or weeds — it depends on your perception).

Is the Mets Season Over? Kyle’s Stream of Consciousness

NOTE: this is a post by Kyle Schnitzer. Please address your comments to him.

If I were Terry Collins last night …

Imagine if you could be New York Mets manager Terry Collins for one day. You get to manage one game and participate in one press conference afterward. What would you say after last night’s game?

NOTE: This is a post by Kyle Schnitzer. Please direct your comments to him.

“El Esta Aqui, El Esta Aquiii” the little jingle that gets stuck in every Mets fans head after every game. Who knew such a playful tune could have such a powerful meaning. “He is here.”

There is a saying (and a song by Joni Mitchell) that goes, “you don’t know what you’ve got till it’s gone”. And so it is with Carlos Beltran, one of the most unappreciated players in Mets history.