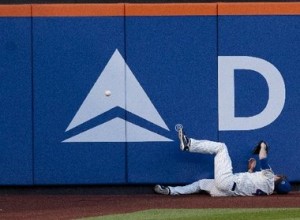 In truth, this game was inches away from being a 7-1 loss. But then, that’s why they call it a “game of inches.”

After a brief homestand, the Mets head north to Toronto to take on the Blue Jays.  Yes, interleague play is here.  The Mets survived Brewing trouble and the Red scare to come away with a 2-2 homestand.  Now they venture not only into the true north (strong and free, apparently), but into the American League East.