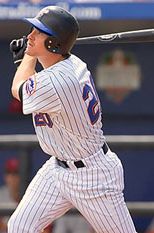 The Mets are making two big moves that will significantly impact their starting lineup this evening.

First, Carlos Beltran will bat second, with Carlos Delgado remaining in the cleanup spot. Who will protect Delgado is not known as yet, but we can speculate that the #5 hitter will be Fernando Tatis.

Secondly, top prospect Dan Murphy was so impressive in his one AAA game, that he has been promoted and inserted into the starting lineup — playing left field.

Huh. MetsToday readers may remember me suggesting the Mets would do exactly that two weeks ago. I don’t believe any other pundit or “expert” made that suggestion at that time nor since — particularly not after Murphy was moved from native position of third base to second base.

To my knowledge, Murphy has played all of four professional games in the outfield, and never before this season. He spent the bulk of his career at third base, mixing in 13 games at first base, before being transitioned to second base for all of 17 games. He played third base in his one game at New Orleans.

Strange that the Mets would start him in left, rather than second, and have Endy Chavez play one of the corner outfield positions. Apparently they weren’t satisfied with his development at the keystone.

Tough assignment for the kid — not only is he making his debut at a position in which he is unfamiliar, but it is against Roy Oswalt, arguably one of the top 5 pitchers in the NL.

OK, these moves may not be that big … all depends on your personal perspective. After the trade deadline passed silently for Mets fans, these moves could be considered “big” in comparison.