MetsToday – Who should be the #1 starter for the Mets, if they make the playoffs? 62% of MetsToday readers say it should be Cliff Lee… Take the poll!

NY Post – In an update to last week’s WWWBD post, Stephen Brown explains why Wally Backman got himself ejected on a home run call while his team had a double digit lead…. Wally was upset that an ump’s bad call was going to tack two bogus earned runs onto his pitcher’s ERA. AWESOME!

TheRoPolitans – Andrew Vazzano tells an idiot to stop being an idiot. Good luck with THAT.

Faith and Fear – A post titled “The Awesomeness of Ralph Kiner.” Do you need anything more than that to check it out? (via The Mets Police)

The Mets are positioned for a serious playoff run – they are 1.5 games behind the division leading Braves and a half game ahead of the Reds in the wildcard standings. Rumors continue to swirl about the team’s interest in Cliff Lee (among others), but doubts persist about Johan Santana’s health and effectiveness.

Meanwhile, Mike Pelfrey is establishing himself as one of the top young pitchers in the National League.

So… assuming you could have Santana, Pelfrey, or any of the rumored trade targets to start the first game of a playoff series, who would it be?

For the purposes of this poll, don’t worry about the prospects or money required to obtain an outside pitcher. Just tell us who you are most confident in as a Game 1 starter.

Who Do You Want to Start Game 1?

The Daily Stache – Kevin Kearns thinks last night’s game might increase the chances we will see Cliff Lee in a Mets uniform this season.

NY Post – Joel Sherman reports that a deal for Cliff Lee will have to include Jenrry Mejia and Wilmer Flores.

MetsToday – According to our poll, 26% of MetsToday readers think Mejia should not be traded under any circumstances. Only 16% say that Flores should be untouchable. Take the poll and let your voice be heard!

Baseball Digest – A look at Jason Bay’s first half non-performance.

SNY – How badly do the Mets need another starting pitcher? Dan Graziano thinks Carlos Zambrano should be on the list of possible trade targets.

NY Daily News – Denis Hamill has a nice article about why he loves watching Cyclones games.

ESPN NY – It looks like the Mets’ “Go Gaga For Wright Night” has failed to put Wright ahead of Placido Polanco in the All-Star balloting. And does anyone really care?

Daily Mets Poll: Who Should Be Untouchable?

Yesterday’s poll asked if the Mets should go after Ted Lilly instead of Cliff Lee.

Today, I ask you this: Assuming the Mets will go after a quality veteran starting pitcher, which young players/prospects should be excluded from all trade discussions?

Granted, a specific pitcher will dictate a specific combination of prospects that will be offered. And when you factor in contract lengths, money owed and additional veterans that can be sent either way in a deal, the possibilities grow even more complex.

But which prospects should not even be considered as trade bait by Omar Minaya? In other words, who should be untouchable?

Which Mets Player/Prospect Should Be Untouchable?

Minaya: Beltran At Least One Week Away

Despite rumblings that Carlos Beltran could be back sometime this week, it seems like Beltran is still at least one week away from returning:

“Somewhere, in about a week’s time, we are going to evaluate him again,” GM Omar Minaya said Monday. Until that time, Beltran will not advance beyond the Single-A St. Lucie Mets.  (NY Daily News) 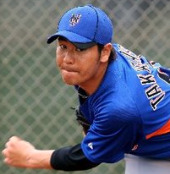