The headline seems silly, doesn’t it? But how much better is he? I believe I’m asking a fair question, based on

R.A. Dickey On The Daily Show with Jon Stewart

In case you went to bed early, below you can see the “circuitous” R.A. Dickey on The Daily Show with Jon Stewart.

Price for Dickey Just Went Up

UPDATE (11/23/2012) via ESPN.com:
In choosing to sign a one-year, $15 million contract with the New York Yankees, right-hander Hiroki Kuroda declined other teams’ offers of more money and years, a source with knowledge of the negotiations told ESPNNewYork.com Wednesday.

In case you missed it, the Yankees just re-signed Hiroki Kuroda to a one-year, $15M contract that includes another $1M in incentives. How does this affect R.A. Dickey’s contract extension negotiations with the Mets? Well, the answer is, how does it not? 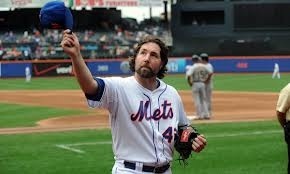