Excited about the 2012 baseball season? Me neither. With one exception, about which you will read below, I have never paid less attention to the start of the season as I have with this one. Regardless of how I/we feel, The Season That Somebody Else’s Favorite Team Wins The World Series is about to begin.

Every year at this time some hapless writer or blogger will do a piece on past Opening Day highlights. At Mets Today, we pride ourselves on being the first to give you these types of insights, remember, I called the opening day roster back in January!

So without further ado, here we go with a glance at some Opening Day Met Memories.

1969: In the first game ever for that franchise, the Coco LaBoy-led Expos beat Tom Seaver and the Mets 11-10. The Mets miss the opportunity to have the first winning record in franchise history. A much bigger prize awaited them later this season. I was not following baseball at that time; my awakening would occur about a year and a half in the future.

1983: Tom Seaver returns to the Shea mound for the first time since the infamous 1977 Midnight Massacre. Turning the clock back even further, Tom’s mound opponent is Carlton. The Mets win, 2-0. Seaver hurls six innings with five strikeouts. Doug Sisk, another Met immortal (but for different reasons), gets the three inning save.

1984: The Davey Johnson-era begins with an 8-1 shellacking at the hands of the Reds. Mike Torrez lasts only an inning and a third. Johnson didn’t want any of the veteran pitchers (Torrez, Dick Tidrow and Craig Swan) on his roster. He would get his way with all three. This season was baseball’s only attempt to avoid cold-weather starts by having the Eastern Division teams all begin either on the West Coast or in the Astrodome. The Mets where the only Eastern Division team to draw a cold-weather city. Ron Hodges is the opening day catcher. What a difference a year will make.

1985: Gary Carter’s 10-inning homer off Neil Allen gives the Mets a 6-5 win. An inauspicious start for Doc Gooden, as he surrenders four runs in six innings. He would rebound.

1987: With Gooden in drug rehab, the Mets begin their defense of the 1986 World Championship by defeating the Pittsburgh Pirates 2-1. Bob Ojeda starts in Doc’s spot. Interestingly enough, the Bucs’ leadoff hitter is Barry Bonds.

1988: Darryl Strawberry and Kevin McReynolds each hit a pair of homers, while Kevin Elster and Lenny Dykstra both hit one, as the Mets beat Dennis Martinez and the Expos 10-6. It was a big start to good years for Straw and K-Mac. Showing how deep the Mets staff was that year, David Cone and Randy Myers both pitch in relief. Unfortunately, the year will end with heartbreak.

1991: In the first game of the post-Straw era, Gooden beats the Phils 2-1. One of Straw’s replacements, Hubie Brooks, steals home for the decisive run. The Vince Coleman+ Hubie Brooks >Darryl Strawberry equation proves to be incorrect, which will lead to the Mets to abandon the build from within philosophy in the coming winter. I was at this game (to date the only opener I have attended). On the way home, it only took three callers to the WFAN post-game show for the carping about the batting order to begin.

1992: Bobby Bonilla hits two home runs including a two-run tiebreaker in the 10th as the Mets beat the Cardinals. It was a nice start for the revamped Mets, who had added Bonilla, Eddie Murray and Bret Saberhagen to their roster the previous winter. Despite all of the hoopla, the Mets where headed for a bad season and then a disaster the following year. But for one night at least, it all came together.

1997: The Bobby Valentine era begins with a 12-5 loss in San Diego. Pete Harnisch goes five innings and leaves with a 4-3 lead. Showing signs of the eccentricities that would become more apparent later, Harnisch had given up chewing tobacco a few days before the game and was undergoing withdrawal come game time. After Pete gave up back to back homeruns to future and past Mets Rickey Henderson and Quilvio Veras, Valentine handed the ball over to his bullpen. Yorkis Perez, Toby Borland and Barry Manuel got torched for 11 runs in one inning. Despite the rough beginning, the Mets finished the year with their first winning record since 1990.

1998: Alberto (Babe) Castillo drives in the winning run with a 14th-inning single as the Mets top the Phils and Curt Schilling 1-0. The Mets begin the year with a desperate catching situation: Todd Hundley is hurt so the light-hitting Tim Spehr and Castillo are assigned the duties. A Memorial Day deal for Mike Piazza would alter the course of the franchise.

2000: The Mets begin the season in Japan with a 5-3 loss to the Cubs. I was traveling on business that week and the game started at about 4AM, so I missed it. If I recall correctly, newcomer Mike Hampton was the starter and loser. Mike got off to a slow start but finished the season as the NLCS MVP.

2003: The Cubs hammer hired gun Tommy Glavine and the Mets 15-2. Roger Cedeno misplays several balls in center field, to the disgust of both Glavine and the hometown crowd. My wife had suffered a near fatal brain aneurysm three weeks earlier, so this season got started without me paying much attention. Both she and the Mets would recover, she faster than them.

2005: The Pedro, Carlos and Omar era begins with a loss in Cincinnati. Braden Looper gives up consecutive inning home runs to blow the lead and then lose the game. It took the Mets five tries that year to get Willie Randolph his first major league win as a manager.

So there you have it. I do think it is worth noting that several good or great seasons (1969, 1984, 1997 and 2005) began with low expectations and a loss, but that year’s edition eventually surprised nearly everyone with how they finished. Only 1985, 1986 and perhaps 2000 came close to living up to the pre-season expectations. My sense is that while all of the gloom and doom about the 2012 season will prove to be well-founded, I am hopeful that some continued development from the young players and perhaps a good deadline deal or two will keep the Mets from being boring, which is a fate even worse than losing.

Do you have a favorite Opening Day memory? Share it below.

From The New York Times Magazine:

Hat tip to my lovely wife, who is always on the lookout for great stories, lists, and graphics related to the Mets. 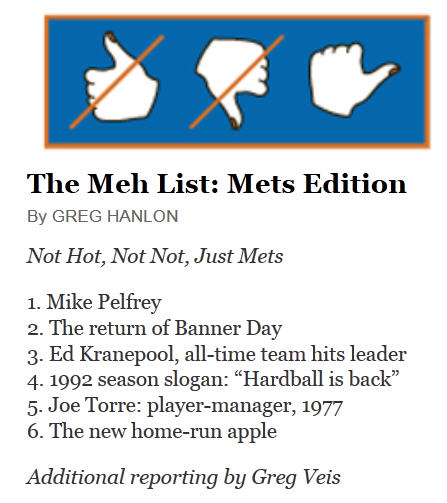 I had a long work day, and skimmed through the game quickly via fast-forward on MLB.com, so the notes are extra brief.

Offense Appears to be Set

It looks like Andres Torres, Jason Bay, and Scott Hairston will be healthy for opening day (In fact, Hairston started in center field today against the Nationals).  In addition, Adam Loewen was reportedly reassigned to minor league camp.  With those nuggets of news, the Mets lineup and bench appear to be set, barring any injuries (*snicker*) between now and April 5th.

The bench will consist of:

IF Turner, IF Cedeno, OF Baxter, OF Hairston, C Nickeas.

Not exactly the ’27 Yankees, especially as far as the bench is concerned.  The lineup has the potential to score some runs if the middle of the order produces the way many believe it can.  But if the ol’ injury bug rears its ugly head again, there’s not much backup support, at least on paper.

But, to coin a phrase, that’s why they play the games.

Quick Notes on Mets vs. Braves

Some very brief notes on yesterday’s exhibition between the Mets and Braves.

During yesterday’s TV broadcast of the Mets – Braves spring training game, Gary Cohen and Ron Darling discussed Johan Santana, with Cohen going so far as to suggest that Santana’s “comeback” might serve as a case study for pitchers who have similar surgery in the future. Darling followed that by half-joking that Randy Niemann might find himself in a medical journal. With all due respect, can we wait until Johan pitches at least an entire month without a setback before even suggesting such things? He’s been on a throwing schedule that is close to a regular season routine for maybe two weeks (if that); the time previous was merely getting into shape. I for one would like to see Johan pain-free and injury-free through at least mid-May before anyone starts talking about his “comeback” — and even then, it might be premature.

What this mentality suggests is that there is a general feeling among people around the Mets — fans, broadcasters, teammates, coaches, journalists, etc. — that Johan Santana pitching on Opening Day is an end goal rather than a beginning. Maybe it’s me and my own misperception, but it seems to me that people think that if Johan can somehow, some way, be healthy enough and ready enough to make the Opening Day start, that everything will fall into place and Santana will be healthy ever thereafter. In other words, Opening Day is the finish line for Johan, rather than the starting blocks. It’s kind of like how many people miss the point of a school graduation — which is usually described as “commencement ceremonies” because it’s supposed to signify the BEGINNING of the students’ next stage in life, rather than the ending of their school years. Likewise, if Johan Santana is able to toe the mound on Opening Day, it should be seen as the beginning of his road back — not the end.

I hope this doesn’t sound like me being “Debbie Downer” because that’s not my intention. Rather, I’d like to point out the reality of Santana’s rehabilitation, and brace people for the very real possibility of some kind of setback occurring once Johan begins following a true MLB routine — and to not freak out when and if that setback happens. In a perfect world, Johan will pitch Opening Day and then go on cruise control for the rest of 2012, making 32 starts without incident. And while I’m sure many people know that’s unlikely to happen, the feel-good warmth of spring in Port St. Lucie can pull at the heart strings of even the most stoic folks.

My point is this: let’s please allow Johan Santana’s comeback to occur before labeling it a comeback — and be prepared for and accepting of setbacks as part of that journey. It’s not fair to him to expect anything else.

Really, it does. When the Mets take the field for a spring training contest this afternoon, two teams will have already finished Opening Day. As you read this, the Oakland Athletics are facing the Seattle Mariners in Tokyo, Japan, in a game that counts toward both teams’ 162-game regular-season schedule. Seriously.

If you don’t believe me, go to MLB.com and watch the game yourself.

Tonight on “Inside China Basin,” Joe Castellano will be interviewing Sport Kinesiologist Angel Borrelli, a scientist who focuses specifically on the pitching motion.

FYI, China Basin is an area within San Francisco; the podcast is focused on the baseball Giants. Though this is not a Giants blog, obviously, some of you may be interested in listening — and perhaps calling in questions to — the show.