Never mind the score — these spring training games mean nothing. Really. No, really.

As we know, part of Sandy Alderson’s “Moneyball” approach is to find value where others aren’t looking. Toward that end, I have a great idea … 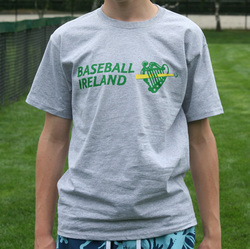 St. Patrick’s Day is coming up quick — so what are you giving the Irish person in your life?

How about a gift that lasts a lifetime, and will benefit not only the direct recipient, but millions of kids?

Donate $35 to the Field O’ Dreams fund raiser and you will get this official T-shirt of the Irish National Baseball team — the ideal gift for the Irish person who has everything (you can’t buy this shirt anywhere else). In addition to the shirt, you also get the satisfaction of knowing you are a part of history — your donation goes toward the building of the first-ever baseball stadium in Ireland.

Does this count as a two-game series?

Collin McHugh still doesn’t impress me with his stuff. But, it was his first appearance of the spring, so I won’t base my judgment on it. At some point, though, he’ll need to get more velocity and sink on the fastball, and more rapid bite on the overhand curve.

Wilmer Flores looked pretty good at second base, turning a few DPs and, while looking a bit mechanical, fielded the balls that came his way without incident. A small sample size, but he looked better than I expected.

Nats’ leadoff man and center fielder Eury Perez has blazing speed. He reminds me a bit of a young, pre-firecracker Vince Coleman, in that he completely telegraphs the fact he’s stealing, but he’s so fast and so good at getting a jump that it doesn’t matter.

Other than starting pitcher Gio Gonzalez, not one National player expected to be in their starting lineup appeared in the game. Just sayin’.

From what I understand, Terry Collins is very high on Jamie Hoffmann, whom Collins oversaw while working in the Dodgers’ minor league system. The 6’3″, 235-lb. outfielder has hit 77 homeruns in 8 minor-league seasons — a career that includes over 300 games in the PCL. How a man that big can hit so few homers is curious; perhaps he suffers from the same disease afflicting Jeremy Hermida and Lyle Overbay. Hoffmann turns 29 in August.

Nats shortstop Zach Walters has a gun. I noticed it in the first ST game and it was confirmed in this one. He likely will be playing in AAA this year, but it’s a detail to keep tucked away.

I know Ike Davis hit a prodigious bomb in this game, but his new stance is pretty wide and you have to at least question why he’s tinkering around. Ike hit 20 homers in the second half, so why fix what ain’t broke? On the other hand, he struggled mightily against lefties, and the adjustment is supposedly aimed toward minimizing that vulnerability. Personally, I don’t see his stance as the crux of his struggles. Rather, it’s his evolution as a dead pull hitter. In his rookie year, he went the other way frequently. Now, he tries to pull every pitch, regardless of location. Even the moon shot he hit in this game was hooked; it was a middle-out fastball that he hit well out in front of home plate and jerked over the fence in right-center. The result was marvelous, but the process was flawed. Is spring training about results, or process? Why would there be any concern about a 400+ foot homer? Because eventually, scouting reports catch up, and both pitching and defensive strategies will be geared toward exploiting the vulnerability that comes with a dead-pull approach. Hey, if Ike can continue to jerk ’em over the fence, it won’t matter. But he’s likely to continue to struggle against any lefty with a rinky-dink slider, and defenses will play him similarly to how they line up against hitters like Ryan Howard

Also in regard to Ike’s issues — he has so much movement in his stride, between his hitching hands and leaning over, that his head moves as a result, which in turn causes the baseball to “move” on him, and that’s why he’s always arguing with the home plate umpire and taking called strike threes. Because his head is moving, his view of the ball is moving. To understand what I mean, stand up, focus on an object, and hop up and down; you’ll see the object hopping. What Ike needs to do is keep his head still once the pitcher begins his motion and as the ball is coming in.

Nats youngster Matt Skole looks like a future beast. He takes a fine cut, a long cut, at the ball. I wonder if his nickname is “Bandit”?

John Buck looks like he could be a fishing and game warden, and/or the guy you want with you on a hunting trip.

There’s no question that Justin Turner looks like a Muppet; the question is, which one?

Matt Den Dekker did what he does best: swing and miss. It’s really upsetting, because the kid otherwise looks like a great athlete who should be able to make more contact. I noticed that he chokes up an inch, which is a good sign, but he has no ability to let the ball get deep before committing to swing. I have to ask the obvious: when was the last time he had his eyes checked? Den Dekker did mix in a single up the middle, which was nice to see.

The first look at Greg Burke was intriguing; I’ve been anticipating seeing him since the Mets signed him, as I have a “thing” for submariners. However, he looks more like a sidearmer than a submariner — more Sean Green than Chad Bradford. He mixes up his angle, though, which could be a good thing if he can keep command. It doesn’t hurt that he’s a Jersey guy. We’ll keep a close eye on him this spring.

The first few times I saw Reese Havens play — in Brooklyn — he impressed me. I loved is hard-nosed approach, enthusiasm, confidence, and the professional way he carried himself. Now, though, he looks puzzled, hesitant, and lacking in confidence. It’s upsetting to see the negative body language and facial expressions from someone whose intangibles were once a major asset. I suppose it has something to do with his chronic injury history knocking him down, and the fact he knows he should be further along than he is. I hope he finds a way to get his confidence back and get back to being the guy that was so impressive five years ago.

Notable absence from the lineup was Lucas Duda, who has struck out six times in seven at-bats thus far — but Terry Collins explained that he sat because his previously injured wrist was acting up. Hmm.

Also notable was Ruben Tejada‘s absence, but his was definitely due to injury. Tejada is suffering from a strained quadricep. Uh-oh — that’s the same issue that afflicted him last year. Remember the last time the Mets had a shortstop with chronic leg injuries? It’s like deja vu all over again.

Hope springs eternal. Therefore, here is the most optimistic post you will read in 2013 at MetsToday.

It’s always nice to win. But with so many different players involved in the ballgame, we don’t judge spring training by wins and losses.