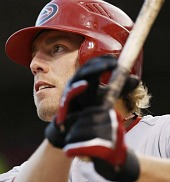 The Arizona Diamondbacks had a busy day in Disney, trading slugging third baseman Mark Reynolds to the Orioles, signing former Met Melvin Mora to take his place at the hot corner, and also agreeing to terms with another former Met, J.J. Putz.

In return for Reynolds, Baltimore sent right-handed relievers David Hernandez and Kam Mickolio back to Arizona. I don’t know much about either of those youngsters; though I swear I saw Hernandez on American Idol a few years ago.

I’m kind of sad to see Reynolds move to the Adulterated League, as I enjoyed watching his hard-nosed play, inspired defense, and moon shots. Though he blasted 32 four-baggers last year, he struck out 211 times and hit just below the Mendoza Line – .198.

Reportedly, Mora signed a one-year deal for $2M. Putz agreed to a two-year, $10M contract, though it hasn’t yet been officially announced.

Back Non-Tender Highlights
Next Milwaukee Gets Marcum