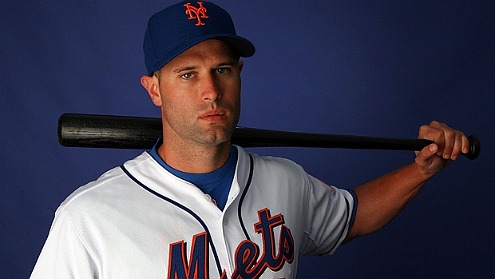 The Animal impressed manager Jerry Manuel early on in spring training, and became an immediate fan favorite for his energy, intensity, all-out play, and likable personality. His story and swing were so well received that it was something of a disappointment when he didn’t go north with the big club in April. But the demotion was temporary, and further fueled his legend.

Carter lit up AAA with a .336 AVG, .390 OBP, and 1.001 OPS through 29 games before his promotion to MLB. His arrival was highly anticipated by the fan base, but he never really was given the chance to take over a position. Though the Mike Jacobs Experiment was failing miserably, Carter was passed over in favor of Buffalo teammate Ike Davis. Both at the time and in hindsight, the Mets made the right move, as Davis stepped right in to anchor first base. In truth, Carter was better suited to a corner outfield spot, and the Mets were underperforming at both corners. However, Jason Bay was not getting paid a boatload of money to be a platoon player, and Jerry Manuel inexplicably refused to remove Jeff Francoeur from right field for more than a game or two – even in the midst of multiple, lengthy slumps. Francoeur hit .211 in May, but Carter sat. Francoeur hit .132 in July, but Carter sat. When Francoeur went 15-for-88 and requested a trade in August, but Carter sat. When Francoeur was finally dumped on the Texas Rangers, Lucas Duda was promoted and Carter sat.

Jerry Manuel – who in the spring lavished him with praise for his work ethic and personality — made jokes to the media about Carter’s fielding skills, so we can assume that was the main reason Carter was relegated to a pinch-hitting role. While it’s true that Carter is not a good fielder – and in fact often looked lost in left field – he was no worse than the 2009 leftfield tandem of Daniel Murphy and Fernando Tatis, and didn’t deserve to be publicly humiliated.

It’s highly unlikely that Carter will get a shot at a starting outfield position next season, considering that Jason Bay will return to handle one of the corners and either Angel Pagan or Carlos Beltran will be in the other. Something could change that situation this winter, but I doubt the Mets are looking at Carter as more than a bat off the bench. As much as I like The Animal as a Met, there’s a part of me that hopes he gets dealt to a team like the Pirates or Royals, who might give him a legitimate shot to play in a regular role. He seems to have a good eye, patience, and a solid bat, and defense is something that can be improved with proper instruction and repetition; we do know he has the motivation and will to work, so anything is possible. At 27 years old, he’s running out of time. Maybe the Sandy Alderson regime will value Carter’s above-average OBP and OPS numbers in the minors and extend him an opportunity, but my guess is that his best shot will come elsewhere.