Where Will Nick Evans Wind Up? 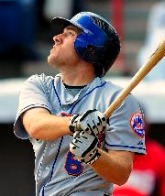 From all reports, it appears that Carlos Beltran will be on the Mets’ 25-man roster on Opening Day. This despite the fact that Beltran has played all of five innings — as a DH — in an MLB spring training game, and has completed 10 innings of game action in right field thus far this spring. His big test comes on Tuesday, when he is slated to start in right field in a Grapefruit League contest vs. the Nationals. If he can make it all the way through without a setback, great, but what does that mean? His ability to play nine innings of healthy baseball is not necessarily the test that needs to be passed before deeming him ready for a spot on the 25-man roster. Rather, we need to see if he can play nine innings of baseball a day after, and two days after, playing nine innings of baseball. There’s little point in carrying him at the beginning of the season if he can play only once or twice a week; why the Mets aren’t keeping him back in extended spring training for at least another week or so is mysterious (ticket sales?).

In any case, putting Beltran on the Opening Day roster means Nick Evans doesn’t make the club — he’s already been placed on waivers, with the intention of sending him to AAA Buffalo if he clears. According to Adam Rubin, we’ll find out by Wednesday whether Evans makes it through.

Will he clear, or is there a Major League team that might claim him?

Considering that every team is finalizing their roster right now, and needing to make cuts of their own, there’s a fair chance that Evans makes it through and on to Buffalo. He hit well this spring (.333 AVG., .378 OBP) while getting more at-bats than any other Met (69), and he posted a combined .907 OPS between AA and AAA last year as a 24-year-old. Scouts have always liked his power potential and he has steadily improved his strike-zone judgment. Though he’s not exactly a defensive whiz, he does have the ability to play all four corner positions — something that may be more valuable to teams that don’t have Jason Bay, David Wright, Ike Davis, and Carlos Beltran manning those spots. In short, his combination of youth, power potential, and versatility are intriguing; one might compare him to, say, Aubrey Huff at a similar age.

Arizona Diamondbacks
The D’Backs have some questionable, aging, short-term solutions in left field (Xavier Nady), first base (Juan Miranda?) and third base (Melvin Mora). A lot of power disappeared with the trade of Mark Reynolds as well, so the team is on the lookout for players who can lift balls over fences. Evans might be a nice fit, particularly as someone who could become a long-term solution at one of those three corners.

Philadelphia Phillies
The Phils have a penchant for picking up former Mets (Wilson Valdez, Brian Schneider, Luis Castillo) so they’re always a threat to claiming another of the orange and blue. Though it appears that strapping slugger John Mayberry, Jr. will be their righthanded outfield reserve / pinch-hitting complement to the lefty-hitting Ross Gload.

Houston Astros
At the moment, Houston’s fifth outfielder is Jason Bourgeois, a 29-year-old speedster with a suspect bat. With Carlos Lee in fast decline and free-swinging Chris Johnson a question mark at 3B, Evans could be considered for both short-term and long-term solutions. Personally, if it were me, and it was between carrying Bourgeois or Evans, it’s a no-brainer and Evans is on my team.

Baltimore Orioles
The aging Derrek Lee is at first base and lefty-hitting Luke Scott is no spring chicken, either. Evans could be a good RH bat to spell both and possibly take over at one of those positions in the near future. However, Jake Fox has had a standout spring and also can catch, so Evans might be redundant.

Seattle Mariners
The Mariners have Milton Bradley slated to start in left field, so right there the team needs a backup plan. Their fourth outfielder is supposed to be Michael Saunders, but he’s been a disappointment. Justin Smoak and Chone Figgins handle the infield corners, and Jack Cust is the DH, but the team is lacking power overall — particularly for an AL club — and could roll the dice on Evans.

Bottom Line
I’m not really as in-tune with the other 29 clubs as I am with the Mets, but from a cursory glance, it seems to me that the Diamondbacks are most likely to claim Evans, with the Astros next in line and the Orioles a distant third. The more I look at the rosters of everyone else, though, the more it seems very possible that Evans makes it through waivers and winds up in Buffalo.

What do you think? Did I miss any teams that might be interested in Evans and have room on their roster? Post your notes in the comments.

Back Manny Acosta Makes Final Bullpen Spot?
Next Boyer In, Acosta Out, Bay To DL?