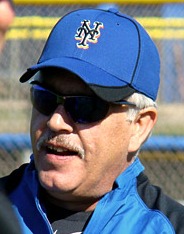 It seems like a minor thing — and I’ve yet to read anything, anywhere previewing the occurrence — but tonight, Wally Backman suits up for a Major League game for the first time since May 14, 1993.

Sure, he’s been around during spring training, but that doesn’t count. The last time Wally was in uniform for a MLB game was in ’93, in Oakland, as a member of the Seattle Mariners, pinch-hitting for Mike Blowers with men on first and second and two outs against A’s righthander Joe “The Saver” Boever. Backman flied out to centerfield to end the 10th inning of a game eventually won in the 11th by the Athletics; Wally was playing third base when the final run scored.

Backman was released by the Mariners three days later; he was 33 years old and hitting .138. He had appeared in all of 10 games — starting in 8 of them at second base. Originally, Backman had signed with the Braves over the previous winter, but didn’t make the team out of spring training and he signed on April 5 with the Mariners, who at the time weren’t sure whether the free-swinging, not-yet-artificially-enhanced Bret Boone was the answer at second base. But Backman was clearly at the end of his string, Boone had returned from AAA and was showing some pop, and 31-year-old rookie Rich Amaral was more versatile and providing surprising offense. Wally’s weak showing in his 10-game audition made him the odd man out when DH Edgar Martinez returned from the disabled list, and so he was sent packing. A few weeks later, the M’s drafted a high school shortstop named Alex Rodriguez — just to give you some perspective.

A few years after leaving Seattle, Backman began his road back to the big leagues, managing a team in the old independent Northeast League (the same league that Ken Oberkfell began his managing career). It’s been a rollercoaster ever since, one that seemed to reach a dead end until Backman was hired to manage the Brooklyn Cyclones last year.

It doesn’t matter what your feeling is on Backman the person or Backman the manager. The story is that after almost 20 years, through challenging obstacles (both self-inflicted and external), and against nearly impossible odds, Wally has returned to a MLB clubhouse, wearing a MLB uniform. Will he ever make it to the next step — one that will see him sitting in the dugout, perhaps as a coach? Time will tell.