Chris Schwinden seems like a nice guy, and a hard worker. He is the kind of guy you want to root for. Unfortunately, he has yet to show that he belongs in MLB. His fastball has no movement and is below average in velocity. His curveball is a hanging lollipop that doesn’t fool anyone. His other pitchers are just for show. In short, he looks like a BP pitcher. If what we’ve seen from Schwinden thus far is what he is, then we are going to miss Mike Pelfrey more than we ever imagined, because there is going to be a big, gaping hole in the starting rotation until / unless the Mets can bring someone in from outside the organization.

After Schwinden left the game, Manny Acosta came in to be the fireman — the Fahrenheit 451 kind. The ‘stros quickly jumped all over his flat fastball, and after three runs came in, Acosta thought it might be a good idea to mix in some breaking pitches. Too little, too late. 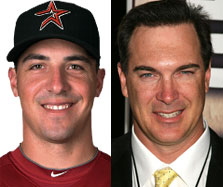 For the Mets, Ruben Tejada enjoyed a successful day at the plate with three hits.

With the lefty on the mound and Lucas Duda ailing, why wasn’t Jordany Valdespin in the starting lineup, in either left or right field? I had forgotten he existed until he entered the game late. I was happy to see Kirk Nieuwenhuis get the shot in Duda’s place, but at the same time, if Valdespin isn’t going to be getting starts then why in the world is he up in the bigs? His versatility is redundant to Justin Turner — it’s not like an extra utilityman is vital to a team that rarely sees their infielders take off an inning — much less a game.

The Mets lick their wounds on Thursday as they travel back home to host a three-game weekend series against the Arizona Diamondbacks. Game time is 7:10 p.m. and the scheduled starting pitchers are Dillon Gee and Wade Miley.