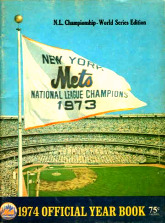 A number of loyal MetsToday readers have commented here and emailed me suggesting that this season could turn out to be a rerun of the magical NL Championship year of 1973.

For those too young to remember, ’73 was the year “Ya Gotta Believe” was coined by Tug McGraw, among other events.

That year, the Mets won 82 games and lost 79, barely edging the St. Louis Cardinals (81-81) and the Pittsburgh Pirates (80-82). Yes youngsters, the Cards and Bucs were in the NL East back then, as were the Cubs and a team from Montreal, Canada, known as the Expos. Further there was no Central Division, and the Milwaukee Brewers were in the American League. This was all “B.S.” (Before Selig) … or is it all “B.S.” now? Anyway, I digress …

There is too much to say about the ’73 season in one blog post, so if you are interested in re-living it, please purchase the book From First To Worst: The New York Mets, 1973-1977

, a fine book that gives a blow-by-blow account of all the details of that year and the three diastrous campaigns that followed.

But there are many similarities between the 1973 Mets and the 2009 edition, the most obvious being their shared lack of punch. The ’73 Mets most prolific slugger was a wiry, street-tough dude named John “The Hammer” Milner (why is it that no one has cool nicknames anymore?), who mashed 23 homers. Only three other players on the team hit more than 6: Wayne Garrett (16), Rusty Staub (15), and Cleon Jones (11).

Obviously, the ’73 Mets didn’t overpower the competition with their offense. It was the pitching staff that carried them to the postseason, led by Tom Seaver. Seaver was arguably the best pitcher in baseball at the time but was victimized by poor run support (sound familiar?). As a result, he won “only” 19 games despite a 2.08 ERA through 36 games started and 290 innings (18 complete games). His 19-10 record was one of only two winning records among regulars in the starting rotation (the other was George Stone, who went 12-3).

Back then — as you might have surmised from the high complete-game total — closers were not used as often as they are now. But in addition to the best starter in MLB, the Mets also had one of the best relievers in baseball — Tug McGraw, who appeared in 60 ballgames, saved 25 of them, and hurled 119 innings (some starters today struggle to reach that number!).

The team was built on pitching, defense, and fundamental baseball, and had little room for error. Much like 2009, the ’73 team was wrought with injuries. First baseman Milner, leftfielder Jones, starting pitcher Jon Matlack, shortstop Bud Harrelson, and catcher Jerry Grote were among the key starters who lost significant time due to injuries. In addition, backup catcher Jerry May, acquired to replace an ailing Grote, injured himself within weeks of joining the team (Duffy Dyer became the backup to the backup), and rookie outfielder George Theodore went down as well. In addition, Staub played most of the year with a badly injured wrist, causing him to swing one-handed and severely diminishing his power.

Amidst the injury spree, a light-hitting, smooth fielding Don Hahn took over in centerfieldand provided clutch hits down the stretch (could that be Jeremy Reed?). For occasional power and leadership, the Mets leaned on aging outfielder Willie Mays, whose best days were long behind him and who was only able to play a few times a week at most (mild parallel to Gary Sheffield, no?).

Without their big hitters for much of the season, the Mets relied on small ball to score runs. Their switch-hitting shortstop — Bud Harrelson — was the main leadoff hitter and baserunning threat until an injury in June took a chunk of his season. In the two-hole they had a slick fielding second baseman named Felix Millan, who choked up on the bat, punched grounders and bloopers for base hits, and was an adept bunter. Sound familiar?

Their manager — Yogi Berra — had taken over the team the previous season as an interim manager, and was a favorite of the media for quotable quotes and malaprops. Though, he expressed a more positive outlook than the ’09 manager when his team hit rock bottom. Ravaged by injuries and stuck in last place halfway through the year, the press asked Yogi if their season was finished. His reply? “It ain’t over till it’s over.”

So how did the 1973 Mets get to the World Series? Mostly because the rest of the NL East was as incompetent and affected by injuries as the Mets. The Cubs and Cardinals were aging teams, the Pirates had injury issues, the Expos had terrible pitching, and the Phillies were in rebuilding mode. Essentially, the Mets “won” the division by losing less than everyone else.

Aside from the contrast in stolen bases, there is one other, major difference between the 2009 Mets and the 1973 NL Champions. A picture is worth a thousand words, so I’ll leave you with this: 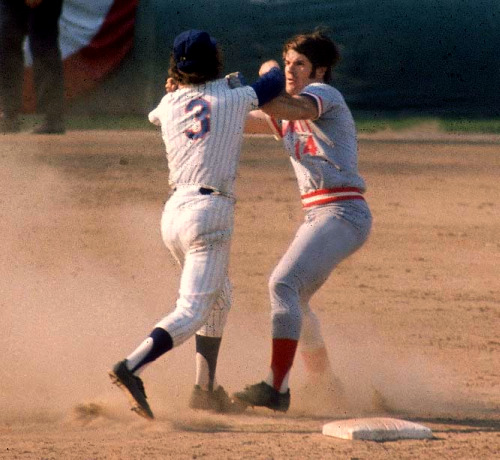