We’ll break them down by position. In this post, I’ll take a look at…

The Mets would like a veteran starting pitcher to anchor a young, Matt Harvey–less rotation in 2014. Not really an ace, just someone to eat innings while Zack Wheeler, Rafael Montero, and Noah Syndergaard grow into the top-tier starters the team thinks they can be.

Tim Hudson, 38, RHP – Hudson should be fully recovered from his ankle injury (inflicted accidentally by Eric Young) by Opening Day. He had a 3.97 ERA and 1.19 WHIP before going down. He’s coming off a 4-year, $36 million deal, and should be affordable.

Paul Maholm, 31, LHP – Aside from Jon Niese, the Mets are thin on left-handed starting pitchers at the major league level, and the high minors. Maholm would give them a decent lefty arm for 150 innings or so. He wasn’t great against right-handed batters, but he held lefties to a .226/.262/.297 slash line. His last contract was 2 years, $11.25 million.

Scott Feldman, 30, LHP – Feldman is a more intriguing lefty. Once a prospect for the Texas Rangers, he started 2013 with the Cubs, and finished with the Orioles. According to MLBTR, the O’s are keen on keeping Feldman, and are looking at a 2-year, $17 million contract. If he falls through the cracks, however, he and his 2013 ERA of 3.86 and WHIP of 1.18 would be welcome in the Mets rotation.

Scott Kazmir, 29, LHP – Perhaps a return home for the prodigal son is in order? After several years of injury and ineffectiveness, Kazmir rebounded to post a 4.04 ERA, 1.32 ERA, and a 9.2 SO/9 ratio with the Cleveland Indians. Given his injury history, however, he’s still a question mark.

Daisuke Matsuzaka, 33, RHP – Matsuzaka spent his last 38.2 innings of 2013 with the Mets. Early on, he walked a lot of batters and took forever to deliver the ball to home plate, both hallmarks of Dice-K’s career, but in his last 4 starts, he went 26.1 innings, won 3 games, and had a 1.37 ERA. He held opposing hitters to a .461 OPS. He’s still a gamble, but he might be worth another look if they can sign him on the cheap.

Dan Haren, 33, RHP – Haren had a bad year in 2013. He had a 4.67 ERA and 4.09 FIP. However, he still struck out 8 batters per 9 innings, and had a 1.23 WHIP. His fastball velocity is down from the level it was in his halcyon days, but good pitchers figure out how to pitch without their best stuff. He’s coming off a 1-year, $13 million contract. If he asks for anywhere near that, the Mets should pass.

The Mets would be wise not to spend a large percentage of whatever offseason budget they have on starting pitchers. They have some organizational depth (as long as they don’t trade any of it), even if it’s somewhat inexperienced. They have more glaring holes to fill at other positions. 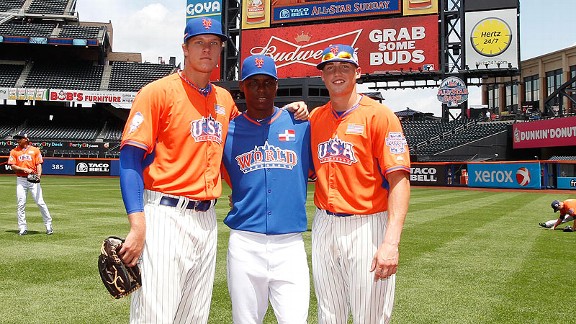 The moment we’ve all been waiting for since July 30, 2004 has finally arrived: Scott Kazmir is available, free and clear, after being released by the Angels.

Kazmir was going to be the lefthanded Tom Seaver until Rick Peterson thought ten minutes could fix Victor Zambrano and the Wilpons believed the Mets were still in the pennant race — despite the fact that they were in fourth place with a 49-53 record and 7 games out of first.

We know how it turned out; Zambrano was awful before going down with an elbow injury, and Kazmir went on to have a few good seasons before struggling with injuries himself (which GM Jim Duquette expected).

Now that Kazmir is out there for the taking, do you want him back in the Mets organization? He’s still only 27 years old.