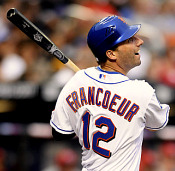 When Jeff Francoeur was acquired from the Braves in return for Ryan Church, the immediate reaction was mixed. On the one hand, the Mets were getting a 25-year-old, high-energy outfielder who regressed for two and a half years after being considered a cornerstone player and future All-Star. On the other hand, they were giving up a right fielder who — as the statheads will confirm — was a better all-around player at the time of the trade. In other words, the Mets were giving away a known, steady quantity in return for a possible flash-in-the-pan — and at that, one that might be sitting on a cold stove.

It was a moderate-risk, high-reward gamble on the part of Omar Minaya, who gave props to John Ricco for suggesting the trade. If Francoeur didn’t work out, the Mets lost a 30-year-old outfielder who had a reputation as a platoon player. And if Francoeur did somehow regain the magic that made him a 29-HR, 100-RBI threat in his early 20s, then the Mets would hit the jackpot.

Almost immediately upon donning the orange and blue, Francoeur turned himself around, hitting .311 with a .338 OBP, 10 HR, and 41 RBI in 308 plate appearances with the Mets. Meantime, Ryan Church did pretty much what was expected in Atlanta, playing less often and posting a .260 AVG, .347 OBP, 2 HR, 18 RBI in 144 plate appearances. Comparatively speaking, the Mets hit the jackpot, right? Maybe, maybe not.

Mets fans — and seemingly, the front office as well — are easily deluded by hitters streaking at the end of season. It goes back at least as far as Mike Vail’s 23-game hitting streak at the end of 1975, and was punctuated by the Great Gregg Jefferies Finish of 1988. As you may recall, the 20-year-old phenom hit .321 in the last 29 games of the season — raising the value of his rookie card into double digits and pushing starting second baseman Wally Backman out the door. We’ve witnessed similarly influential finishes and streaks since — most recently with Daniel Murphy and Fernando Tatis in 2008 — only to be disappointed the following year when the player in question crashed back to Earth, his limitations exposed over a 162-game season.

While it’s true that Francoeur is a 5-year MLB veteran, while most of the other examples were first-year rookies, the delusion still applies — you can’t let a small sample of work create unfair expectations on a player. Nor does it make sense to over-reward a player for a hot streak. There’s nothing wrong with reward, but it has to logically coincide with the performance.

That said, does Francoeur deserve to be penciled in as the Mets’ 2010 right fielder? I think so, considering that he has been productive at the MLB level before, giving some hope that he can return to being a reliable and useful everyday player — especially considering his age. But more to the point, the Mets don’t have much in the way of alternatives, neither at the big league level nor anywhere in their farm system. Further, there is already a gaping hole in left field that must be filled. Unless the Mets are able to sign both Matt Holliday AND Jason Bay, chances are that one of the corner outfield spots would be manned by someone not unlike Francoeur — and may have cost more in terms of dollars and/or years.

Which brings me to another point — it’s OK to give Frenchy a shot at RF in 2010, but a contract extension (as has been suggested by the Mets’ front office) doesn’t makes sense. Sure, Francoeur may bust out with a 30 HR / 100 RBI / .300 line in 2010, but he may also bust like Joe Charboneau. Either way he’s still under control through 2011, so let him earn that extension or juicy arbitration award based on a fabulous and full 2010 season.

I’ll be rooting for such a year.

Back Jauss In, Alomar Out
Next If Steve Phillips Succeeded