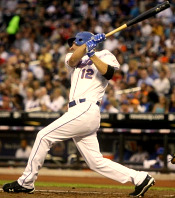 According to a tweet by Bart Hubbach of the NY Post, the Mets plan to bring Jeff Francoeur back in 2010 — and may even negotiate a contract extension with him.

I know the statheads like to point out his poor OBP, lack of walks, and some other deficiencies in his game (and they’re correct in their analysis), but the bottom line for me is that as a fan I like Jeff Francoeur — I enjoy watching his hard-nosed, old-school style of play, I like his hustle, and i like the fact the he looks like he’s enjoying himself on the field. And since I’m not expecting success from the 2010 Mets, I’m looking for other things to cheer for — i.e., a reason to turn on the TV every night at 7pm. Jeff Francoeur could be one of those reasons.

Much of the criticism for Francoeur came about because he was overrated. That’s completely understandable — he was anointed as a “franchise player” after consecutive 100-RBI seasons at ages 22 and 23, and that put him under the microscope. If you look hard enough, you’ll find flaws with any MLBer not named Albert Pujols, and it’s particularly easy to find holes the game of a player 25 years old or younger.

With the Braves, Francoeur was supposed to be a centerpiece — a cleanup slugger the lineup would be built around. With that kind of expectation, the faults — such as the over-aggressiveness — become magnified. The optimist in me wants to believe that all the public talk about his lack of discipline affected Francoeur, and he clearly has made many attempts to change his approach.

As a Met, the expectations are much lower. Hopefully, the Mets pick up the TWO sluggers they need and can bury Francoeur in the sixth or seventh spot in the lineup. He turns 26 in January, so there is still time for Francoeur to develop — that’s part of the reason I have hope. And though there’s so much beef with his walk totals, Francoeur did walk 42 times in 2006 as a 23-year-old — not a great number, but not awful for a kid that age who had been rushed through the minors. It shows he’s capable of being more disciplined, even if he didn’t progress in that area. He also hit 29 homers as a 22-year-old. Again, he’s capable, but hasn’t progressed. He’s also had a 40-double season and two 100-RBI seasons. In short, there is raw ability in this young man, and he has both a passion for the game and enough pride to work at his weaknesses.

No one in Flushing is asking him to be a superstar, and it’s understood that he’s still “learning on the job”. He may never be a 30-HR guy again, and may never walk 100 times, but maybe he now has the opportunity to relax a little and make that progress that didn’t happen in Atlanta. Looking around at what’s available — outside of Jason Bay and Matt Holliday — I think the Mets are smart to roll the dice with Francoeur for 2010. The alternatives (Rick Ankiel? Xavier Nady? Jermaine Dye?) are far from flawless. Besides, having one less position to think about can only help the front office focus on filling more urgent holes (i.e., catcher, starting rotation, bullpen, left field).

Back Josh Thole To Return Early?
Next One More Time for Edgardo Alfonzo?