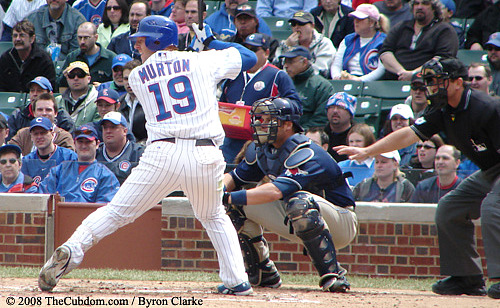 In case you hadn’t heard, the Colorado Rockies have DFA’d Matt Murton to make room on the roster for

Can the Mets Make a Deal?

It’s less than a month before spring training, and the Mets still need a frontline, #2 / #3 type starter; middle relief help; starting rotation depth; and a legitimate left fielder (who ideally bats with power from the right side). They also have a question at second base and might have interest in upgrading the catching position — though those issues are not nearly as dire as the others.

If you hear it from Omar Minaya, however, the only question is the starting pitching. Whether he’s lying through his teeth or not is up for debate, but his public opinion is that the middle relief will be handled by one of the rule 5 picks and Sean Green; the starting pitching depth is covered by Jon Niese and Bobby Parnell; and he’s very comfortable with Fernando Tatis and Dan Murphy in left field.

The reality is that, if he truly believes what he says, then the Mets are likely to finish in third … or fourth place. The Phillies, Braves, and Marlins all will be competitive in ’09, and the Mets as currently assembled do not look head and shoulders above any of them. They could tip the scales their way with the acquisition of a big bat and a solid starter, and there’s still time to do so.

However, it appears that neither of those acquisitions will come through free agency. It’s interesting to see the media and fans clamoring for the return of Oliver Perez — only months ago, many of these same people couldn’t see the inconsistent Ollie flee fast enough. That said, the idea that Perez is the “frontline” starter the Mets need is somewhat amusing. But hey, he’s the best left of a sorry lot, and if the Mets can re-sign him, then that one hole is filled.

But if they don’t, what is their recourse? The latest rumor suggests that Ben Sheets is the answer. Sheets does have frontline skills, but would the Mets want to add another health risk to a rotation filled with question marks? The next-best option after Sheets is Jon Garland, who is a nice innings-eater but at best a #4.

Conversely, the big bat the Mets need has been staring them in the face all winter: Manny Ramirez. For whatever reason, though, they continue to resist making an offer to the best righthanded hitter in the universe. After Manny, no options exist; the only other righthanded-hitting outfielders of consequence are Andruw Jones, Jay Payton, Jonny Gomes, and Kevin Millar (though, Moises Alou has not yet officially retired). Like Manny, the Mets have shown no interest in any of these players.

Maybe the Mets sign one of the aforementioned starters. But if they don’t go after Manny — and that appears to be a foregone conclusion — where will they find that righthanded bat for left field? Certainly not from the farm system — the only position player close to MLB ready is Nick Evans, who was overmatched in his short stint last year. A trade would have to be made.

But what do the Mets have available for a trade? Their organization is so low on valuable chips, it took four minor leaguers, three MLBers, and help from the Indians to obtain J.J. Putz. In order to make a trade for an impact bat, the Mets would likely need to orchestrate a similarly complex deal, or create another hole to fill.

Naturally, the Mets won’t be trading Jose Reyes, David Wright, Carlos Beltran, Mike Pelfrey, nor Johan Santana. You can probably add Carlos Delgado to that mix, and it’s hard to believe they’d swap away John Maine — he’s needed for the rotation and his injury puts his stock at an all-time low. No one wants Luis Castillo, so forget about that idea. Ryan Church might have some value, but because of his headaches, his greatest value may be to the Mets. Pedro Feliciano also might draw interest, but then the Mets are without a steady lefty in the bullpen. At times this winter, there’s been talk of moving Brian Schneider, perhaps to the Red Sox but 1) will he be enough to bring back an offensive force, and 2) if so, where do they find a new starting catcher? Would free agent Ivan Rodriguez be an option? The Mets would need to move fairly quickly to swap Schneider and still have time to sign Pudge.

Looking around MLB, there isn’t an abundance of available outfielders that fit the Mets’ needs. Righthanded hitters with some punch have become a rarity — which is why the Phillies were forced to add LH-hitting Raul Ibanez to their already lefty-heavy lineup. A quick look around turns up the names Eric Byrnes, Austin Kearns, Jose Guillen, Marcus Thames, Xavier Nady, and Gary Matthews, Jr., as players who might be available. Not exactly an awe-inspiring group, and yet most of them are probably unattainable in return for what the Mets have for trading chips. It might make sense to spin a youngster like Evans for a proven hitter stuck in AAA — someone like Matt Murton — or to take a chance on a guy who once showed promise, such as Gomes. But that doesn’t really upgrade the current situation of uncertainty in the outfield — rather, it muddles it further. There are only so many at-bats available in spring training to offer the likes of Tatis, Murphy, Evans, Jeremy Reed, Angel Pagan, Marlon Anderson, and whomever else is invited to ST.

Bottom line — unless their thinking changes in regard to the free agent pool, the Mets are likely to enter spring training with similar personnel as they have today. But of course, anything can happen.