No Physical for JJ Putz

While being interviewed by Chuck Garfien on Comcast Chicago (hat tip to MetsBlog), J.J. Putz admitted that he had bone spur in his elbow long before his trade from the Mariners to the Mets, the Mets were aware of it, and the Mets didn’t put him through a physical prior to making the deal official.

“When the trade went down last year, I never really had a physical with the Mets,” Putz told Garfien. “I had the bone spur (in the right elbow). It was discovered the previous year in Seattle, and it never got checked out by any other doctors until I got to spring training.”

According to Putz, the Mets told him not to discuss the injury with reporters, saying:

“I knew that I wasn’t right. I wasn’t healthy. The toughest part was having to face the media and tell them that you feel fine, even though you know there’s something wrong and they don’t want you telling them that you’re banged up.”

There are so many things wrong with this I don’t know where to start. Why would the Mets knowingly acquire damaged goods, especially knowing the high salary that came with it? Why would they give up so much talent in return?

The answer is simple: season ticket sales. The Mets latched on to the nonsense propogated by the media that the reason they missed the 2008 postseason was due to a terrible cast of characters in the bullpen (rather than the mismanagement of the bullpen, the lack of an extra slugger, piss-poor fundamentals, below-average defense, occasional lackadaisacal effort, or the fact the rotation was absent of a high-quality starter behind Johan Santana). It was easy to blame all the team’s woes — and in particular their second consecutive late-season collapse — on one scapegoat, the bullpen.

Once everyone bought in to the idea that “the Mets bullpen needs a makeover”, the signing of Francisco Rodriguez combined with the trade for Putz was a seemingly simple solution that would propel the Mets back into the postseason. Therefore, the story the Mets sold to prospective season-ticket buyers was: “we’re bringing back the same team, adding two elite relievers, so we’re a lock to make the playoffs — hurry and buy a ticket package lest you get shut out from the glory and celebration in October”.

It didn’t matter that Putz was damaged, and could possibly miss the bulk of the season. As long as the injury was kept secret, people would believe the Mets would have a fantastic bullpen — perhaps the best in all MLB — and therefore would easily trot to “meaningful games in October”.

Why else would a team send seven players to two different teams for a $7M player? Why else would they completely ignore a documented history of chronic elbow problems?

Further, why would a team allow a high-salaried pitcher with a known injury compete in the World Baseball Classic? Perhaps because if they didn’t, people would wonder why — and the injury could be revealed. Or, maybe the plan was to keep fingers crossed in hopes that Putz could stay healthy enough in short spurts to display his 95 MPH a few times — in turn getting Mets fans jazzed up to buy ticket packages in March.

This time, it’s not a conspiracy theory. This time, the Mets really did know something, and kept it from the public, for the sole purpose of ticket sales. 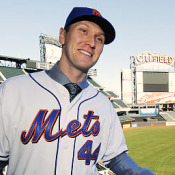 Which makes one wonder about Jason Bay and the various concerns that caused the Red Sox to pull a 4-year contract off the table. Suddenly, we can’t be so sure to believe Bay’s assertion that he’s completely healthy. After hearing this news from Putz, we need to re-examine the detailed, bizarre story written by Rob Bradford of WEEI regarding what happened with Jason Bay and the Red Sox. Perhaps the Red Sox cautious approach was valid. Maybe there is a good reason that the Mets were the only other publicly known bidders for Bay’s services.

After all, the top “scapegoat” for the Mets’ failures in 2009 — after, of course, the injuries — was the lack of homeruns. The Mets’ “story” for prospective 2010 ticket buyers is this: “When healthy, we have a championship club. And now we just added a big-time slugger to hit some homeruns and really annihilate the competition. So hurry up and buy your ticket package lest you miss the glory and celebration in October!”

Of course, it doesn’t matter whether Jason Bay has potential injury issues that may creep up as soon as mid-season. All that matters is you phone in your ticket order — NOW. Leave the worrying about what happens after Opening Day to the Mets.