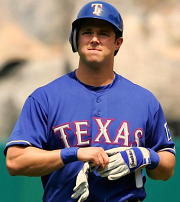 Over the weekend, the Mets signed Frank Catalanotto to a minor league contract with an invitation to spring training.

If you are a longtime reader of MetsToday, you know I’ve been pining for Catalanotto for several years — going all the way back to 2006. In addition to my prefence for local products (Smithtown, NY), I’ve always coveted Catalanotto for his grit, hustle, and all-out play — he fits the definition of a “gamer“, or someone who can help give the Mets “edge“.

Beyond the immeasurable intangibles Catalanotto brings to the table, he also does enough offensively to keep the Beaneheads interested. More specifically, he has a knack for getting on base (.358 career OBP). He also sees a lot of pitches and doesn’t strike out often — he could be described as a “contact hitter”, and as such is a good choice for hit-and-run situations. Though some peg him as a singles hitter, he has a little more pop than most people realize. Don’t expect him to hit homeruns, but he can drive the ball into the gap and pick up some doubles. On the bases he once had above-average speed but at age 36 he’s likely lost a step, and was never a major threat as a basestealer. Still, he won’t clog the basepaths and he will be a smart baserunner, tending toward the aggressive side.

Defensively, he is adequate to average at 1B, 2B, and 3B, and plays a fair outfield (corners only). Statistically, his outfield numbers are not outstanding, but he won’t embarrass himself. He’ll catch what he can get to, throw to the correct base, hit the cutoff man, and will rarely make an error. In the field, he’s comparable to Fernando Tatis, with slightly stronger instincts and more experience both in the outfield and at first base.

One of his big positives — hustle — is also a negative in that his all-out aggressive play can lead to injuries. He’s had chronic issues with his hamstrings, back, and groin that could creep up again.

If this were three years ago, I’d be very excited to see Catalanotto on the team and would expect him to platoon somewhere. At this point, he is worn and aging and was only so-so in his NL debut last year with the Brewers, so I’m going to keep my expectations low — though I’m still thrilled that he’s finally a Met.

Where he fits in depends on whether the Mets intend to give any of their youngsters a crack at the 25-man roster and, of course, injuries that may develop during the spring.

“Omar [Minaya, the Mets’ general manager] said he needed a good lefthanded hitter off the bench,” Catalanotto said. “I know I’d have more opportunities, more at-bats in the American League as a designated hitter. But Omar said there would be some playing time in the outfield and at first base. And he thought they’d pinch hit a lot. This is an excellent opportunity.”

From my count, the Mets bench will consist of exactly five men, four of which are currently filled by the backup catcher, Alex Cora, Fernando Tatis, and Garry Mathews, Jr. Catalanotto would fit in nicely as a lefthanded pinch-hitter who can play multiple positions, but will have to fight off Chris Carter, Nick Evans, Anderson Hernandez, and a few other youngsters. Which is too bad, because I would prefer to see an open competition for two or three if not four bench spots; instead, everyone will be competing for one uncemented position on the roster.

Back Rose-colored Glasses
Next No Physical for JJ Putz