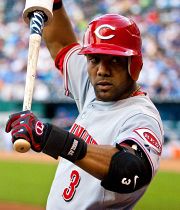 The Reds have sent centerfielder Willy Taveras and infielder Adam Rosales to the Athletics for utilityman Aaron Miles and a PTBNL.

This trade has perked up the ears of some Mets fans and pundits, who are now wondering if it signals an opportunity for the Mets to trade Angel Pagan and a bag of balls to Cincy for Brandon Phillips, Bronson Arroyo, Aaron Harang, and perhaps even Joey Votto.

Such as it goes in that solar system where the planets revolve around Flushing.

In reality, I doubt highly that Taveras’ exodus to Oakland has anything to do with another deal for the supposedly cash-strapped Reds and everything to do with shedding some salary while making room for rookie Drew Stubbs.

The only place where the Mets come into the conversation is to ask why they traded Brian Stokes for Gary Matthews, Jr. if Taveras was available?

Yes, we would have gone ape on the Mets if they acquired Taveras — whose lack of patience at the plate makes Jeff Francoeur look like Rickey Henderson and whose power makes Luis Castillo seem like Barry Bonds. But in comparison to Matthews, Taveras makes more sense — if, of course, we believe the Mets are truly dedicated to building a team around defense and speed.

Offensively, Taveras wouldn’t provide much at all. He’s an over-aggressive singles hitter whose OBP is directly tied to his batting average. In fact his batting is similar to Argenis Reyes, the guy who “always was in the middle of something”. When he does get on base, however, he is a major threat to steal and score. Not only can he fly, but he’s an intelligent baserunner who gets great jumps, gets good reads on line drives, routinely takes the extra base, and rarely suffers from vapor lock or other boneheaded baserunning blunders we are all too familiar with as Mets fans. In fact it wouldn’t be crazy to suggest he’s a better all-around baserunner and basestealer than Jose Reyes.

Defensively, Taveras has few peers. Like his baserunning, he gets good reads and jumps, and makes use of his speed to outrun balls others can’t reach. He makes few errors, hits the cutoff man, throws to the correct base, and even gets a half-dozen assists per year.

Because of his inability to get on base, his salary ($4M) is too high — Matthews at $1.5M is cheap in comparison. But you get what you pay for, right? One other problem with Taveras was he suffered multiple nagging leg injuries last year, so there is the risk that, at 28 years old, he could be slowing down — and without his legs, he has zero value.

Should the Mets have traded for Taveras instead of Matthews? I don’t know, maybe. As mentioned before, we still would’ve killed them for it, but if you really want to connect the Mets and the Reds, Taveras was the most realistic possiblity.