Kevin Burkhardt and Matt Cerrone are three days late with their April Fools Joke; below is what is posted on MetsBlog as the Mets’ Opening Day starting lineup: 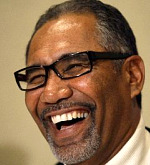 Or maybe the above was orated by Jerry Manuel on April 1st, and Burkhardt didn’t realize it was a joke.

Because only a fool would bat Alex Cora leadoff, and Mike Jacobs ahead of Jason Bay.

There’s also some humor in playing Gary Matthews instead of Angel Pagan, and placing him in the #6 spot — though, I guess it’s arguable. Maybe Pagan didn’t prove anything based on his performance last year, and maybe Jeff Francoeur isn’t a better hitter than GMJ.

What I like most about this joke is the lefty-righty going on. You know, you don’t want to have two lefty hitters in a row, because then the Marlins will have an advantage when they bring in a LOOGY.

You know what? If I were manager of the Mets, I’d purposely stack two LH bats or two RH bats in a row, to entice Fredi Gonzalez to bring in someone crappy like Clay Hensley or Renyel Pinto. Don’t you WANT the other team’s 11th- and 12th-worst pitchers in the game?

I can’t decide which is the most laughable aspect of this joke: Jacobs in the cleanup spot or Cora at leadoff. Cora, of course, has a career OBP of .313 — and even when he was so great for the Mets last year, he reached base only 32% of the time. His speed, never great, is average at best now that he’s 34 years old. But hey, let’s make sure he comes to the plate more often than anyone else on the team!

Similarly, when the Wilpons shelled out $66M for Jason Bay, was it with the idea that he’d provide protection for Mike Jacobs? Not to mention that Jacobs’ career numbers are worst when he’s hitting fourth (we’ll get into that in further detail later).

If the above is NOT a joke, then it may be time to schedule a lobotomy for Manuel, because something is not right inside that man’s head. It’s scarier than the lineup seen in my nightmares. Speaking of that nightmare: