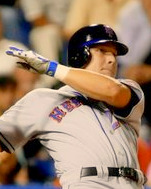 Besides the obvious, there is solid statistical evidence that Mike Jacobs should not be batting fourth for the Mets — or in anyone’s lineup, for that matter.

While it’s true I tend to eschew many baseball stats, the truth is, I do find stats to be valuable in evaluating a ballplayer. Further, sometimes one uncovers numbers that reveal or prove something about a player’s “makeup” or “character” — things that supposedly can’t be measured.

Such as these stats by Mike Jacobs:
[TABLE=46]

The “#” refers to the spot in the lineup. PA = Plate Appearances, AB = At-Bats, OPS = On Base Pct. + Slugging Pct. and the rest you can probably figure out.

Are you seeing what I’m seeing?

But generalized stats do not necessarily apply to every single individual. Ballplayers are human, therefore unique, and therefore may react differently than the norm, depending on the situation. For example, based on the above stats, it could be surmised that Mike Jacobs either changes his approach when hitting cleanup, or simply feels uncomfortable batting fourth.

That’s not an outlandish theory, is it? Anyone who has played at least little league baseball knows that there is something attached to hitting fourth; it’s an anointment of sorts, and it comes with perceived responsibility. The “slugger” bats “cleanup” because he’s the guy who’s counted on to “clean up” the bases / drive in the runs. Maybe, just maybe, Mike Jacobs has this “thing” about hitting cleanup that keeps him from being the best he can be when penciled in to that spot.

My friend James Kannengieser of AmazinAvenue claims the “sample size” is insufficient to support my theory. I beg to differ, based on the following:

So the “sample size” of Jacobs hitting anywhere other than fourth is actually larger than his sample size in the cleanup spot — does that mean it’s more indicative of what kind of hitter he can be?

(Side note: I don’t think there is an argument regarding batters “protecting” Jacobs in the lineup, considering that he appears to hit better the lower he goes, and lesser hitters tend to hit lower in the order.)

Based on his career splits, I believe there is at least a strong theory worth arguing here — not that there should be ANY argument regarding Jacobs hitting fourth. I’m not sure why any manager would see Mike Jacobs as a cleanup hitter, considering his prodigious strikeout totals and below-average plate discipline — which remain fairly consistent regardless of his lineup position.