How the Mets Opening Day Lineup is Like Thriller 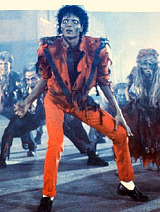 I woke up in a cold sweat from a nightmare … I heard the Mets 2010 Opening Day lineup, announced by Vincent Price:

OK … the first four spots aren’t scary; they’re perfectly acceptable in fact. But beyond Bay in the cleanup spot things do get a bit creepy, don’t you agree?

Murphy in the five-hole is disturbing, unless you are of the ilk that the “serious” young man will continue to develop as a hitter, and particularly as a power hitter. If you have faith that Murphy will turn into someone who hits .285 with 20+ homers, then OK, maybe the lineup is not so scary for you yet. And perhaps you also believe that Francoeur will return to his 2006-2007 form. You know what, I’ll give you both those possibilities; let’s pretend that Murphy and Francoeur will be surprisingly effective offensively in 2010.

That still doesn’t make up for the frightening final third of the lineup.

It seems completely plausible that Henry Blanco will be Santana’s “personal catcher” in 2010, given that Santana specifically recommended his fellow countryman to the Mets brass during the winter. And you can’t argue the point that Blanco is a strong defensive catcher who pitchers enjoy working with. But can an NL lineup compete with three automatic outs at the bottom of the order?

Maybe you are ultra optimistic, and believe that Blanco – Cora – Santana will hit better than .220 combined. Glad you are resting peacefully, and not being terrorized by the THRILLER!