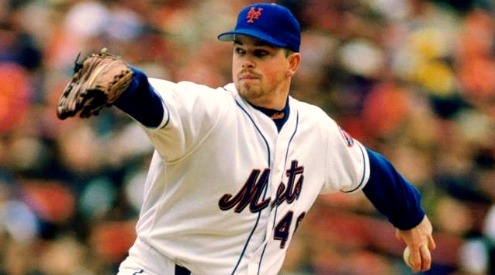 But there’s something to be very cautious about here, too. Niese appears to suffer from Glendon Rusch disease, in that he gives up hits at a much greater rate than one would expect given his strikeout and home run rates. The major league batting average on balls in play last year was .291. Niese finished at .333. Usually when something like that happens, it gets written off as a fluke and the pitcher gets talked about as a bounce-back candidate for the next year.

In Niese’s case, this likely has a lot to do with a lack of fastball movement. He can get swings and misses, particularly with his breaking balls, but hitters tend to line up hit fastball pretty well. It’s not something that figures to change, so Niese may well be one of those guys who is never quite as good as his peripherals.

Pouliot neglects to mention that the Mets also had the worst defense in all of baseball last season, at -59.7 UZR, so that might explain why Niese’s FIP was .96 lower in 2011 than his actual ERA.

That being said, Niese might very well be the type of pitcher that never lives up to his peripherals. The Mets had a very average defense in 2010, yet Niese’s BABIP was still high (.324).

Yes, thus far, Niese does seem to be particularly hittable (although another season of data would help), and I wouldn’t bet on him living up to his 3.36 FIP. However, he probably was not quite as bad as his 4.40 ERA suggests either. The answer is probably somewhere in between.

Back Should Mets Sign Jimmy Rollins?
Next Did the Mets Spend to Win?