The question of the night: why was D.J. Carrasco pitching for the Mets in the 8th inning of a one-run game? 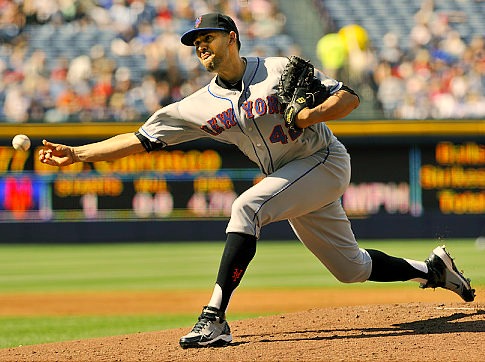 In case you missed it, D.J. Carrasco is back with the Mets after some injury issues and a short stint in AAA. I’m sure you are pleased upon hearing this news.

The great mystery, of course, is what angle — or angles — will we see Carrasco pitch from? Is it going to be overhand, sidearm, or submarine? All three? Will any of them be effective? Maybe he has figured out a way to propel the baseball from out of his belly button, which may be no more effective but may be neat to watch (though, I’m not sure whether the rule book allows it). Who knows, maybe he’ll do a Luis Tiant-like turnaround windup and twist so far that he throws the ball with his left hand; certainly, it’s worth a try.

What say you? Are you excited that Carrasco is back on the 25-man roster? Anyone want to place a bet on his arm angle? (Please, no bets accepted by anyone who saw him throw in Buffalo.) What role, exactly, will he fill? Mop up? Seventh inning setup? Spot starter? Post your bets and theories in the comments.

With 8 days until pitchers and Molinas report, the #8 question to be answered during spring training is: what arm angle will D.J. Carrasco throw from, and will he pitch well enough to make the 25-man roster?

After being non-tendered by his previous clubs two years in a row, D.J. Carrasco signed the first multi-year contract of his life last winter — a two-year, $2.4M deal with the Mets that included another $150K in performance bonuses. At the time, it was seen as a prudent move by the new Mets front office, in that it was an inexpensive contract for someone who was seen as a reliable, above-average middle reliever. Additionally, there was talk of Carrasco providing additional value as a spot starter.

As it turned out, Carrasco failed as a reliever and in his one and only start at the big-league level. He spent part of the year in AAA Buffalo in an effort to regain his stuff. At times, Carrasco was effective, but for the most part he was middling at best, and overall underwhelming. By August, he was all but a lost cause, and transformed himself into exclusively a submarine pitcher in a desperate attempt to become relevant again. Unfortunately, the experiment failed miserably, and by the end of the season he was nothing more than a mop-up reliever.

It’s hard to imagine where D.J. Carrasco fits into the Mets’ plans next year. The submarine experiment was successful in proving he is not a submariner. He delivers the ball from several different angles, but inadequately from all of them. The Mets owe him another year and $1.4M, and that’s enough reason to keep him at the AAA level for depth and to hold out hope that he’ll figure out something that can be used in MLB again. To me it makes sense to plan the 2012 pitching staff without him, and if Carrasco can provide something, it will be a pleasant surprise.

If this were 1960, the season would now be over. Unfortunately for Mets fans suffering through a meaningless September, there are still 8 more games to go.

This was really MUCH closer than the final score indicates. And I know I’ve typewritten these exact words several times this year, but trust me — it was really and truly a close game, for most of the contest.

In case you missed it in yesterday’s post-game notes, D.J. Carrasco has been sent down to AAA Buffalo. This means that

“Six in a row to make it go” is an old gear head / car enthusiast term referring to an inline six-cylinder engine. Perhaps it is also Terry Collins’ new mantra for getting his team going — six losses to get them moving toward a win? Or something. I’m trying here.