According to Sandy Alderson, Nick Evans has cleared waivers and accepted an assignment to AAA Buffalo. 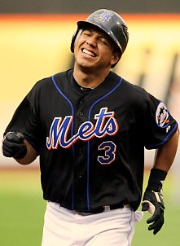 Watching Luis Hernandez limp around the bases was excruciating yet inspiring; the image will forever be etched in my mind. He absolutely commanded my respect for that display of True Grit in a way not even John Wayne could have demonstrated.

Beyond that vignette, however, there isn’t much to say about the journeyman utility infielder.

Rather than waste my time (and yours) with a post devoted to Luis Hernandez, please see the 2009 analysis of Argenis Reyes, and use your imagination.

Further, let me present a topic for argument: why did we see so much of Luis Hernandez and not so much of Justin Turner. Discuss amongst yourselves.

So much for playing the role of spoiler.

Well, now that I think about it … they are acting as spoilers for the Phillies, in that they are giving the Braves a chance to gain ground on the NL East leaders.

The Mets wasted another strong effort by rookie Dillon Gee, who went 7 strong innings, allowing 3 runs on 6 hits and 3 walks, striking out 3 and expending 95 pitches (60 for strikes). He has been impressive in all three of his big league starts, but before we get too excited and pencil him into the 2011 rotation, remember that both Pat Misch and Nelson Figueroa were similarly effective last September, and neither were on the Opening Day roster. Though, next year Gee won’t have to compete with immortal figures such as Oliver Perez and John Maine, so he may have a fair shot.

Strange fact: Gee has allowed only 13 hits in his 3 MLB starts, but 6 were for extra bases (one homerun and five doubles).

In one-third of an inning of relief to start the ninth inning, Bobby Parnell was awful, allowing 2 hits, including a solo homer by the reincarnation of Nate McLouth. I’m guessing this was some kind of a test, to see how he would handle a high-leverage, late-inning situation, since the Mets were only down by one; many managers would use their closer in such a spot. If it was a test, he failed — miserably. On the bright side, there are 13 more opportunities for another quiz.

On offense, Angel Pagan and Jose Reyes both went 2-for-4 from the top of the lineup, with Reyes hitting his 11th homer of the year and Pagan stealing his 35th base. However, the rest of the order managed only 3 hits against Tim Hudson and the Braves bullpen — one of which was a solo homer by Luis Hernandez, who did so on a broken foot. Hernandez fouled a pitch off his foot prior to sending a shot over the wall, and limped around the bases in excruciating pain.

David Wright stole his 19th base but went 0-for-3. He’s hitting .283 at the moment and his OBP has dropped to a startlingly low (for him) .358 — he should be at .390+. I’m faulting his big-swing approach, which has also resulted in an unimpressive 23 homers through exactly 600 plate appearances. At age 27, he should be entering his prime years, not trending downward. But we can’t put any blame on his mentor Howard Johnson (even if we gave HoJo credit for D-Wright’s good years). It’s not HoJo’s fault that Wright hasn’t had consistent protection hitting behind him this year. Hmm … is that really a plausible explanation?

With this loss, the Mets guaranteed that the Braves would have winning record vs. the Mets for the 2010 season. This has been the case every year since 1998, except for 2006.

According to various sources, the Mets have traded Jeff Francoeur to the Texas Rangers for middle infielder Joaquin Arias.

Jeff Francoeur ended his Mets career as their cleanup hitter. There’s something wrong with that, isn’t there? Though, it is in line with the Mets starting their season with Mike Jacobs in that lineup spot.

So in the end, the Mets ultimately turned Lastings Milledge into Joaquin Arias. Well, at least Arias was once traded for Alex Rodriguez.

With Arias on the club, how the heck are the Mets going to find at-bats for Luis Hernandez?

In other news, the Mets announced that Lucas Duda and Jenrry Mejia have been promoted to the big club.