Could Tom Seaver Have Been Even Better?

In the event you don’t subscribe to The Fix podcast, you may want to listen to season 2, episode 4, which, among other things explains how Tom Seaver might have been able to throw with even more velocity than he did in his career, by making one change to his stride. Find out the flaw that robbed Tom Terrific of MPH.

Also, the show goes into detail on torn flexor tendons, Gavin Floyd‘s olecranon fracture, how 38-year-old Matt Thornton can still throw 95+ MPH, and a thorough explanation of Josh Edgin‘s stretched UCL. Yes, much of this news is a week late, but all of the lessons and information contained within is timeless. If you’re a pitcher or coach or parent of a pitcher, you’ll learn something helpful.

Listen below or go directly to BlogTalkRadio.

Adam LaRoche Back to Nats 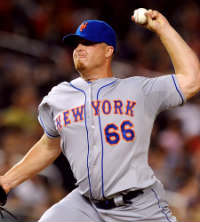 Despite showing an intriguing skill set during spring training, Josh Edgin was left behind come April, finally making it to Flushing in mid-July. Once a member of the big club, Edgin saw plenty of duty out of the bullpen, performing with mixed results until he was shut down for the season on September 20th due to what was deemed enough use for one year. 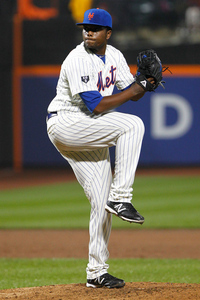 Can a blog be speechless?

Happy Baseball Season everyone. I was able to attend last night’s Buffalo Bison-Lehigh Valley Iron Pigs game at beautiful Coca-Cola Park in Allentown, PA. I bought these seats in January, hoping to get a glimpse of either Matt Harvey or Jeurys Familia. Instead, we got Dylan Owen, making an emergency start for Jeremy Hefner, who was called up that afternoon. As a “bonus” the Pigs pitcher was old friend Pat Misch. The real treat was seeing just-promoted Josh Edgin. A good outing for Edgin: 1.1 IP, 2Ks, 1 H and 0 runs. The Bisons won, I think. The frigid temps and light flurries during the 7th-inning stretch forced us to leave before the final out.

After too long of a wait (glad to be working again!) it was good to see professional baseball again. Minor league baseball is a hoot. For about $75, I got four tickets behind the Bison’s dugout, a parking pass and some warm food. The baseball is good and the Iron Pigs do a decent job of keeping the patrons entertained in between the action. There are stats aplenty for us prospect-watchers and an accurate radar gun.

But enough about me…

Matt Harvey’s start in Buffalo matches how he finished the season in Binghamton. For the record, his numbers this year in AAA read like this: 1-1 with a 6.63 ERA, 1.84 WHIP and .308 BAA. Not exactly Top of the Rotation numbers. Yes it has only been four starts, but at this juncture, Harvey appears to need plenty more seasoning before he can be rightly considered as part of the solution.

No Reese Havens last night, either on the field or on the roster. Comparisons to Fernando Martinez abound, but Havens’ injury history reminds me more of the Jay Payton saga. Like Havens, Payton was taken as a compensation pick for losing a lefty free agent pitcher (Payton: Sid Fernandez, Havens: Tom Glavine). Drafted in 1994 and highly-touted, Payton had four surgeries, three on his elbows and one on his left shoulder. After spending the better part of his first several professional baseball years on the DL rehabbing, he finally made his debut late in 1998 season, only commit to a major base running gaffe in a key loss to Atlanta. The good news is that he later rebounded to help the Mets to a World Series berth as the starting CF in 2000. Hopefully Reese’s story has a similar outcome.

The time off has got to be killing Havens. Daniel Murphy is looking less and less like the long-term answer at second base and Jordany Valdespin is apparently being groomed as a utility player. If healthy, Havens would probably be on the fast track to Citi Field. Instead, he is off on another rehab taking swings in a Port St. Lucie back lot somewhere.

Like most fans, I was pleasantly surprised by the Mets decent start. And I really enjoy rooting for a bunch of guys who came up thru the system. But let’s be real: none of these baby Mets are likely to ever become perennial All-Stars. My sense is that the ceiling for most of them is a complimentary role on a good team. That isn’t to knock them at all and hopefully, that future good team for most of them is the Mets. I just don’t see any of them developing into the centerpiece of a World Series winner. Pick any one: Kirk Nieuwenhuis, Murphy, Josh Thole, Dillon Gee, Bobby Parnell, Lucas Duda, Ruben Tejada, Ike Davis and even the recently-extended Jon Niese. There is no consistently outstanding facet of their game and each is missing something. As the team did in the mid-80’s with Keith Hernandez and Gary Carter and then again a dozen years later with Mike Hampton and Mike Piazza, they will probably have to go outside of the system to get those missing ingredients that push them to the top.

And finally, I resist the notion proffered in some places that having half a roster comprised of homegrown players is proof that Omar Minaya wasn’t such a bad GM. Please. First off, the austerity movement imposed on/implemented by Sandy Alderson left the Mets with little choice than to give several of these players roster spots. Then there is WAR (Wins Above Replacement), a stat that works pretty well in measuring value. The WAR for each of the aforementioned players is in the 1.5 to 2.5 range. Consider that the top five or so elite players for each position typically post a WAR of 3.5 or above. A bit more subjective perhaps (and that’s one of the beauties of baseball), but pull up any of the top Mets prospects lists that came out last winter. Two of the names at the top of every list are Zack Wheeler and Brandon Nimmo, both of whom arrived after Omar left.

What do you think? Concerned about Harvey? Have a Reese Havens sighting to report? Think Omar was a good GM? Sound off in the comments section!