Adam LaRoche Back to Nats 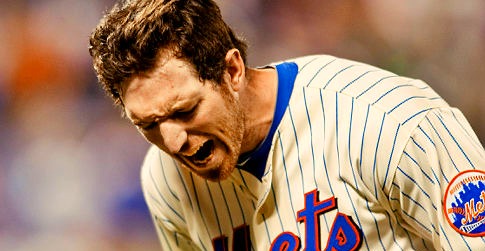 Remember Ike Davis? He was the really tall first baseman with the big-fly swing. You may remember him from the early spring, when there was still a shred of hope for Mets fans. 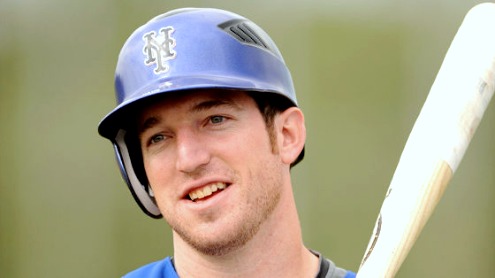 I will be the first to admit I didn’t think Ike Davis would do as well as he did, as quickly as he did. My projection was for Davis to spend at least another half-year in the minors, and join the Mets at some point in July or later – after it was clear the team was out of contention.

As it turned out, Davis arrived earlier than expected, stepping in to the starting first baseman position on April 19th and never looking back.

Davis was good for a 23-year-old first-year player, finishing the season with a .264 AVG., .351 OBP, 19 HR, and 33 doubles in 600 plate appearances. His 72 walks were impressive for a rookie, and although he tended to be streaky, his hot and cold runs evened themselves out over the long-term, culminating in average production for an MLB first baseman – not bad for a 23-year-old. Additionally, he flashed fancy glovework in the field, proved capable of prodigious power, and made adjustments after pitchers made adjustments to him.

Assuming Davis builds on his 2010 debut, the Mets should have a player who is somewhere between Adam LaRoche and Eric Karros – which, I understand is not the Adrian Gonzalez type that the most optimistic of Mets fans would like, but isn’t too shabby. Considering the power (and strikeouts) generated by his long swing, it wouldn’t surprise me if Davis reached the level of Adam Dunn at some point in his career. The kid can hit the ball a long way; the only question is, how often will he make contact?

Unless something crazy happens this winter, we can expect Ike Davis to be the Mets starting first baseman in 2011 and beyond. It will be a treat to see how he evolves.

Since the second half began, the Mets could not blame the pitching for their woes — it was the offense that was sputtering while the starters and relievers did their darnedest to limit scoring by the opposition.

The thought has been that eventually, the offense would come around and, combined with the stellar pitching, the Mets would start winning again.

On Sunday afternoon, however, the Mets couldn’t blame the offense for losing. They received neither hitting nor pitching.

Thankfully, the Mets Hall of Fame induction occurred prior to this laugher, because during the TV broadcast, the inductees regaled us with stories in the SNY booth to distract us from the disaster occurring on the field below.

The Diamondbacks were not nice to Jonathon Niese, hammering him for 7 runs on 7 hits and 3 walks in only 4 1/3 innings of work. Adam LaRoche in particular was a problem for Jon, as he blasted two three-run homers against the young lefthander.

In the postgame, Jerry Manuel mentioned that Niese’s curve looked “slider-like”. Interesting, since I have been pointing out exactly that as an issue in nearly all of his previous starts. To succeed, and get good bite on all of his pitches, Niese has to stay on top of the ball, with a more overhand arm angle and release point.

Elmer Dessens fared no better, allowing 3 runs (2 earned) on 4 hits and a walk in 2 2/3 innings. Oliver Perez came in as the mopup man and “limited” Arizona to 4 runs on 5 hits and a walk over the final two frames.

On offense, the Mets managed five hits — two of which came in the last inning against Esmerling Vazquez. They couldn’t do anything against starter Daniel Hudson, who tossed 110 pitches in 8 innings.

The Mets remain the only team the Diamondbacks have beaten since the All-Star Exhibition.

Who knows, maybe the Mets were “playing down to their competition” against Arizona — the second-worst team in the NL. Maybe when they go up against better teams — like first- and second-place teams — they’ll step up their game. Oh, and that theory will be tested immediately, if you look below …

The Mets shove off to Atlanta to begin a three-game series with the Braves on Monday, followed by a weekend series in Philadelphia — so no more “home field advantage”. Monday night’s contest starts at 7:10 PM and pits Johan Santana against Tim Hudson. 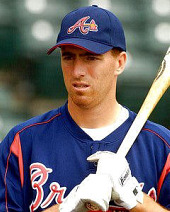 Early in the offseason, there was some mild buzz that the Mets might be interested in free agent first baseman Adam LaRoche. However, there’s been absolutely nothing to suggest he is on Omar Minaya’s radar since at least early December (possibly earlier) — most likely because he was looking for too much money over too many years.

But, things have changed for the lefty slugger.

LaRoche’s top suitor, the San Francisco Giants, grew tired of his contract demands and chose instead to sign Aubrey Huff to a one-year deal. Huff joins fellow free agent pickup Mark DeRosa and incumbents Pablo Sandoval and Juan Uribe to provide the Giants with four solid possibilities for the infield corners — and effectively eliminating the acquisition of LaRoche. And with that, the market for LaRoche has suddenly shrunken — considerably.

Tommy “Gun” Hanson handcuffed the Mets hitters through seven frames, allowing them only three hits and three walks en route to his tenth victory of the season.

Pat Misch accomplished a typical fifth-starter job — 4 runs allowed on 8 hits and a walk in 5 innings. Nothing spectacular, nothing terrible, either.

Braves first baseman Adam LaRoche was a one-man wrecking crew, going 4-for-4 with two homeruns, 4 runs scored, and 3 RBI. That “strong finisher” theory that moved Atlanta to acquire him from Boston continues to ring true.

The Mets were shut out for the 11th time this season.

Atlanta leadoff batter Nate McLouth was 2-for-5 with 3 RBI.

Hanson has one of the best overhand curveballs in baseball today. It has excellent, tight, 12-6 to 1-7 rotation, consistently drops it at the bottom of the strike zone, and throws it at two speeds — around 85 MPH and around 76 MPH. He mostly kept it toward the middle of the strike zone, with a “yellow hammer” vertical drop of 3-5 feet, and if he ever learns to spot it on the corners, he’ll be a regular no-hit threat.

I bumped my head after falling off the chair with laughter when Bobby Ojeda and tried to compare Bobby Parnell to Hanson. Forget mentioning them in the same sentence — Parnell doesn’t belong in the same PARAGRAPH as Hanson. I like Parnell, am rooting for him, but that’s like comparing apples to ribeye steaks.

The Mets had four hits on the night, two by Dan Murphy, who is making a case to be penciled in as the 2010 first baseman.

Braves did a nice job of picking up lefty reliever Eric O’Flaherty for nothing at the beginning of the season; he has a 3.14 ERA and 1.25 WHIP through 69 games. Kind of like how the Mets were smart to take Darren O’Day in the Rule 5 Draft (though, not smart enough to hang on to him).

The first two pitches of the ninth inning resulted in outs. Dan Murphy and Jeff Francoeur should be ashamed of themselves — that’s selfish and unintelligent baseball. I don’t care if you’re down by six in a meaningless game — you still play the game right. For you youngsters, the “right” way to play the game is to TAKE A STRIKE when your team is losing by two or more in the late innings and there is no one on base. Why? Because you can’t hit a three-run homer with no one on. In the cases of Murphy and Francoeur, they couldn’t hit a 6-run homer to tie the game. Their best chance of winning was to try to build a rally, and walks are almost always a part of building rallies (often a big part). Let the other team make mistakes, make them execute and beat you — don’t make it easy for them. See more baseball playing and coaching tips at OnBaseball.com.

The Mets and Braves do it again at 7:00 PM on Wednesday night. Bobby Parnell faces Derek Lowe.

The clock has struck four and the apple in Citi Field may as well be a pumpkin.

No trades for the Mets, but a flurry were made by others. Since the 2 PM update, the following occurred.

Red Sox get Victor Martinez
The Bosox were expected to do “something”, and they did, moving Adam LaRoche (see below) and adding Casey Kotchman and Victor Martinez to their lineup. Martinez can catch, play 1B, and DH; his presence along with Kotchman’s likely means “Big Fraudi” Ortiz will have more time to “research” his PEDs usage. The Red Sox gave up three pitchers — Justin Masterson, Nick Hagadone and Bryan Price. Nice haul for the rebuilding Indians, and a deal that helps both clubs going in opposite directions.

White Sox acquire Jake Peavy (again)
This time Peavy OK’d the deal, according to various sources. What changed since the last time? More importantly, Peavy is currently on the disabled list. Isn’t there an MLB rule stating that a player on the DL cannot be traded? The Padres get a foursome of prospects: Clayton Richard, Adam Russell, Aaron Poreda and Dexter Carter.

Nationals trade Nick Johnson to the Marlins
Stunning to see an in-division deal, but the Nationals are so far down in the standings they’re listed in the Central. The Fish gave up minor-league LHP Aaron Thompson, a 2005 first-round pick who compares to Tom Glavine — meaning, a soft-tosser (89-91 MPH fastball) who relies on control and guile. The 22-year-old has struggled with injuries and has been something of a disappointment. I’m not sure who he would compare to in the Mets’ system … maybe Michael Antonini? (Though, Antonini is two years older.) But stop thinking about it … where would you put Johnson with Dan Murphy entrenched at 1B?

Nationals trade Joe Beimel to the Rockies
Lucky for the Mets, they just missed seeing the LOOGY face their slugging LH hitters in key situations (had there been any such situations, or if the Mets had any dangerous LH hitters). They also missed out on adding him to their own bullpen. The Rockies gave up two undisclosed minor leaguers.

Blue Jays trade Scott Rolen to the Reds for Edwin Encarnacion
This deal had been rumored for several weeks, with the Jays supposedly uninterested in the free-swinging Encarnacion. But they came to their senses when they realized that free swinger was only 26 years old and is as good a fielder at the hot corner as Rolen used to be. Being 13 games out tends to knock sense into teams.

Braves acquire Adam LaRoche from Red Sox for Casey Kotchman
Whoa! Where did this one come from? Theo Epstein’s saberbrain loves Kotchman’s OBP, youth, and contract status. We thought the Braves didn’t like LaRoche’s passive attitude, but I guess they’ll look the other way and focus on his homerun bat. Instant upgrade for the Bravos.