It’s deja vu all over again with Edgin, who had a similar drop in velocity (though no reports of elbow discomfort) around around this time last year. Ironically, last March we discussed and illustrated Edgin’s mechanical problem that caused the drop in velocity — and suggested that an injury would be forthcoming, without the flaw being fixed — right here at MetsToday.

As far as I could tell, the flaw was never fixed — below are photos taken at various points during the 2014 season that illustrate his arm still being behind (among other issues). Oh, and as it turned out, Edgin had “elbow inflammation” in July 2014. An MRI taken soon after revealed bone spurs and tendinitis, and a platelet-rich-plasma injection reportedly offered no benefit. Edgin took about two weeks off and returned to action September 9, making 6 more appearances before the end of the year to help the Mets tie the Braves for second place. 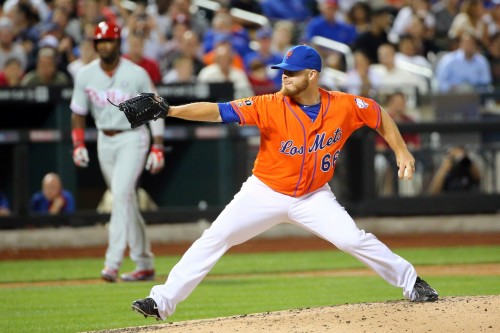 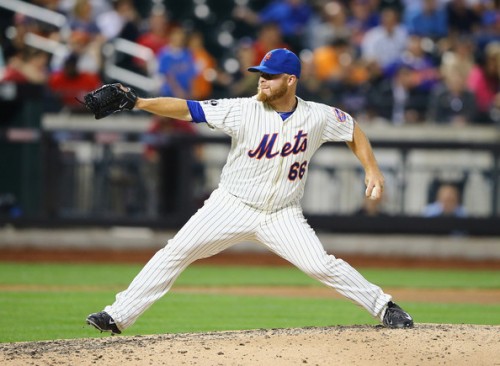 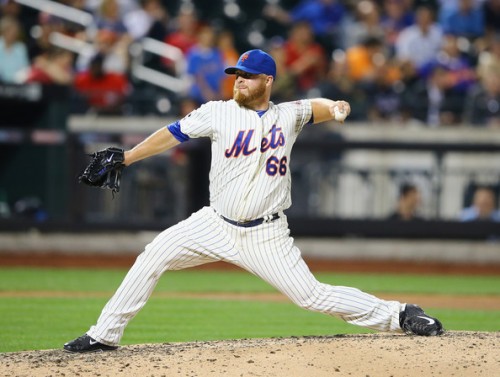 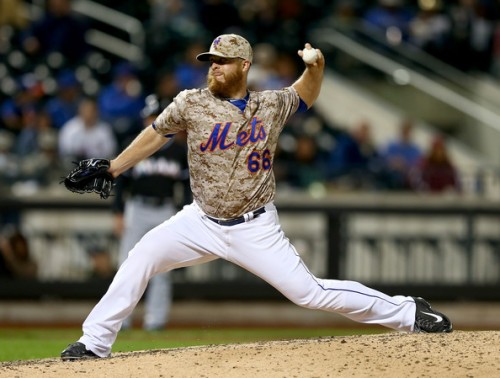 The previous are random still shots taken from 2014, between June and August. With the front foot about to hit the ground in the top two photos, it’s clear the arm is very, very, very, far behind. In the next two, it’s clear that the hand is nowhere near the optimum “high cock” position (sophomores, stop snickering — it’s an actual scientific term for the overhead throwing motion). The hand and ball need to be up, with the arm creating more of an “L” position, when the front foot hits the ground. The photos above clearly show that Edgin’s left hand is not there, and where it is, is so far behind that it is dangerous and likely damaging.

Interestingly, that’s not the only dangerous flaw in Edgin’s mechanics. There is another issue that we’ve seen before from Mets pitchers in the past (Johan Santana) and Mets pitchers of the present (Bartolo Colon) — the hand too close to the ear at “high cock” position. 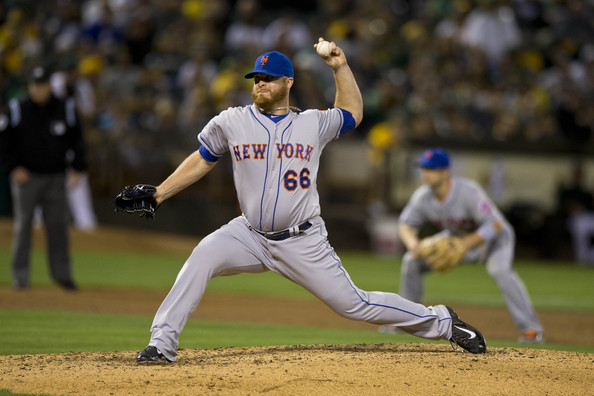 This position is not quite as drastic as Santana’s or Colon’s, but it’s still not great, and it puts strain on both the shoulder and the elbow.

Here is an example of Colon, whose mechanics suggest he’s always a whisker away from a major shoulder and/or elbow injury: 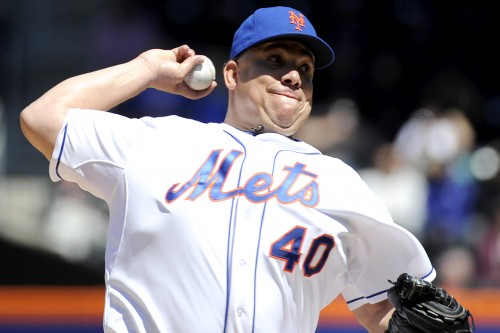 But let’s not get off-topic. We’re discussing Edgin.

The arm being behind is not the only issue. There is also the problem of his right leg landing too “closed” — in other words, his front foot is pointing toward first base instead of toward home plate. This results in a few problems. First, it prevents the hips from completely “opening” and providing power from the legs. Second, it puts significant strain on the front knee. Third, it causes the arm to go “across the body,” which puts a strain on the shoulder. For another example of an inefficient and dangerous landing foot position, see Jon Niese — he had a shoulder problem that we discussed here on MetsToday right around this time last year.

But again, the focus is on Edgin. Check it out: 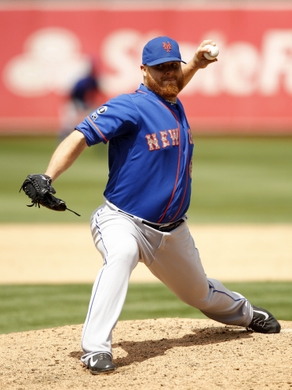 Oh, and yet another flaw — something called “leading with the elbow,” which is a strain on the, um, elbow: 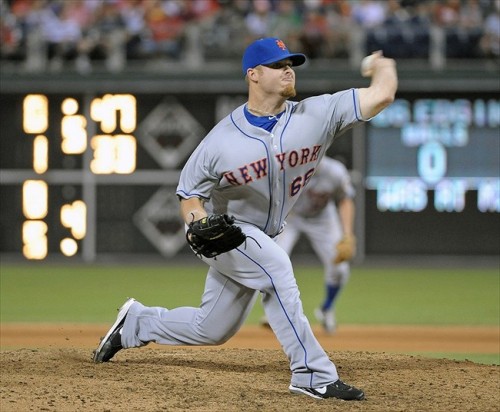 And one more thing about his front leg: because it’s turned in and a little too far ahead — i.e., over-striding — his body is pulling backward instead of driving forward at acceleration, which robs him of velocity and, again, puts undue strain on the arm.

But hey, what do I know? I’m just a hobbyist applying extremely shallow, surface knowledge of kinesiology mildly enhanced by consult with a scientist. The Mets, as a Major League franchise and with plenty of assets to put toward such things, should know much more than I. They should have scientists on their payroll to analyze things like this full-time, right? Maybe not, based on what’s been stated publicly.

Interestingly, there was a story in the Daily News last week that mentioned Edgin working on his mechanics after being sent down last spring:

After being cut, he said it gave him a chance to work on mechanical issues — he was rushing his delivery — and his mental approach.

“Rushing his delivery” … hmmmmm … no, not really sure what that means, nor how we went about fixing it. All I know for sure is that his arm was still way behind after the returned to the big leagues.

Did the Mets identify any of the flaws in Edgin’s motion and correct them, so that his elbow issue wouldn’t flare up again? Apparently not.

Mets manager Terry Collins had this to say:

“That would be a concern that [Edgin’s] velocity is not there yet,” Collins said. “So that is something we certainly have to work on arm-toss wise, arm-speed wise because that sets the tone for everything.”

I don’t know what that means. I bet Collins doesn’t know what he means. How does one work on velocity “arm-toss wise, arm-speed wise”? And how do those two “wise” factors set the tone for “everything”?

If I had to guess, I’d guess Collins means that Edgin’s throwing arm had to “speed up.” Yes, it probably did, but it’s not something that happens independently from the rest of the body. One doesn’t usually work on making the arm move faster, one works on getting whole-body timing correct.

But Dan Warthen‘s comments are even more confounding. First, from ESPN:

However, pitching coach Dan Warthen on Tuesday told ESPNNewYork.com that last year’s issue is different from the current one. A year ago, “we felt like he was out of shape,” Warthen said.

And from the Daily News:
“It seems more like dead arm,” pitching coach Dan Warthen said. “It’s in his elbow and his biceps. He’s had it before, and it’s something we think he has to get treatment and work through. But we’ll make sure.”

There’s something that I must make clear: I’m not blaming Warthen nor Collins for their ignorance. Neither has a degree in physiology, biomechanics, nor kinesiology. Neither of them should be expected to know or understand body movement. Further, the Mets aren’t the only MLB team lacking in this knowledge. My point is not to call out the Mets specifically, but rather, to call out MLB in general for completely and consistently missing or ignoring fairly simple warning signs of pitching injuries due to unnecessary ignorance. The knowledge is available, the scientists exist — so why aren’t MLB teams hiring them to help? Why do we keep hearing nonsensical theories from laypeople (i.e., former MLB pitchers/MLB pitching coaches) about innings limits, pitch counts, youths pitching too often and not playing other sports in the winter, yadda yadda yadda? The inability to properly analyze pitching mechanics and identify mechanical flaws is a remarkably detrimental factor toward the rash of pitching injuries (though not the only factor). What’s keeping MLB from tapping the resources that can help? Considering MLB’s 11-billion-dollar revenues, it’s not a matter of money.

Pose your theories in the comments.