In case you missed it, Mike Francesa gave his opinion on the Mets after they were swept by the Rockies. Francesa doesn’t need me to promote him, so it pains me to do so, but this is absolutely priceless. And couldn’t be more true. He pretty much lets out every thought and emotion that many Mets fans have been holding in for the past few weeks, and poo-poohs every bit of spin being spun by team management.

Do you find yourself making decisions in your life based upon the next Mets game? Not just clearing your schedule to watch all nine innings, but changing things to conform to your ideas about your own role in the action? Do you attach an unnecessary importance to completely unrelated and simple options such as picking what chair to sit in or when to look away from the TV?

You have to face the fact that

Mike, Matt: Can We Duel Already? 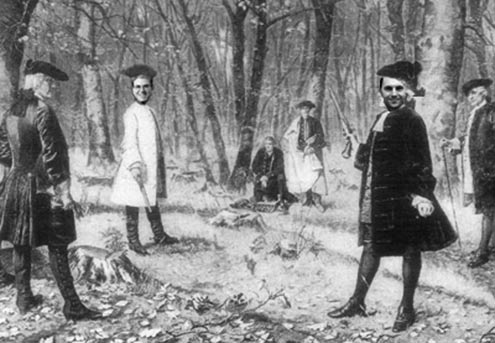 It seems so long ago, but this wasn’t the first time Mike Francesa criticized Matt Cerrone.

Mike says “who cares what Matt Cerrone thinks“? Matt addresses the comment, then removes the post. Then Mike backtracks (a little). The bloggers unite, calling out Mike and every other old-school media dinosaur who couldn’t power on a computer if their life depended on it — much less “get” this “blog thing”.

In the end, it’s welcome drama to an otherwise slow Memorial Day weekend in the blogosphere.

I still say let’s stage a duel between Matt and Mike to settle this like men, and create an enormous public relations opportunity / fund raiser. I have the ideal location.

Or maybe there’s another way … cast your vote below:

Q&A and More with Wally Backman

Steve Serby has an entertaining Q&A with Wally Backman in today’s New York Post, which I encourage you to read.

In case you missed it, Bart Hubbach posits Backman as a possible successor to Jerry Manuel.

Ben Shpigel of The New York Times gives his take on the second chance afforded Wally.

In between officiating a mustache contest and getting hired to be the Brooklyn manager, Wally visited a nursing home near Shea Stadium Citi Field.

From the archives, here is Toby Hyde‘s take on the possibility of Wally returning in a minor league role with the Mets running the Mets’ player development system — which he termed “crazy talk” — written back in August. Ironically, Toby likely will be covering the Cyclones as part of his MetsMinorLeagueBlog next summer.

If you missed it, you can listen to Mike Francesa’s interview with Wally Backman on WFAN

And here is Wally reading from cue cards:

Can you ever remember so much media attention given to the hiring of a Rookie Short-Season A league manager?

In case you missed it yesterday, Mike Francesa hosted Jeff Wilpon, Omar Minaya, and David Howard on his WFAN show. Francesa joked that Howard’s presence was “to be a filibuster”. In truth, it was because he is “the guy” associated with Citi Field, and the homage to the Brooklyn Dodgers was of course the most successful accomplishment of the New York Mets franchise in 2009.

Oh did you mistake “success” for “winning”? No, friend … success is bottom-line profits. And as you will hear in the interview, the Mets “brand” did well in its ability to serve its “customers”. But that should be changing in 2010 — if we are to believe the head honchos of the Mets’ organization.

Understand that the above links lead to material that may not be suitable for all audiences. For example, they are not for those with a weak stomach, nor for the strong of mind. I also would not listen to these clips if you are suffering from anxiety, depression, or stress disorders.

Some of the things I personally gleaned from the interview …

– Daniel Murphy will not return to the outfield, and he may or may not return as the starting first baseman

– Jeff Wilpon insists that the Mets will continue to have one of the highest payrolls in MLB, and that Omar Minaya has no financial constraints

– Further, Wilpon will not be “slicing payroll”, will be “aggressive” on the market, and his commitment this winter is “to give Omar the resources he needs to put a championship team on the field”

– Neither Minaya nor Wilpon believe the team needs a “rebuilding”, and they plan to use a mix of free agent signings and trades to “fix the holes”

– Minaya’s role and responsibilities as GM will not change

– Citi Field was built so large because Omar Minaya’s philosophy was to build a team around pitching, defense, and speed (hmm … the plans for Citi Field, including the vast dimensions, were unveiled in 1998 — when Minaya was an assistant to Steve Phillips)

The Mets have publicly changed the goal from “putting a winning product on the field” to “putting a championship team on the field”. Wilpon claims that the financial coffers are available to make that happen.

We are going to hold on to these two points in particular as we watch and analyze this winter’s moves.

For our latest edition of “Manuel Being Manuel”, we have this from Jerry Manuel, stated in an interview with Mike Francesa on WFAN: