Soto, Loney Off the Table

Minutes after filing the Mets Fan Window Shopping: Catcher story, the Rangers and Geovany Soto agreed to terms on a one-year deal. So much for that. The only catcher under 30 left on the market is Jesus Flores; I say sign him and A.J. Pierzynski and call it a day. Your thoughts?

Not long after, the Rays announced the signing of James Loney. Yawn.

In other news, Jason Isringhausen is reportedly considering another year — he says there’s a “70% chance” he’ll return, whatever that means.

Additionally, Brad Lidge has retired, so scratch him off of your Christmas wish list.

That’s it for the moment. If you hear any major news, please feel free to post it in the comments.

A few days ago we asked “Where is Jason Isringhausen?”

Well, he found a job a few days ago — with the Angels.

Izzy signed a minor-league deal but is expected to have a significant role with the Major League club. Per manager Mike Scioscia:

“Jason is going to slot in with LaTroy Hawkins and Scott Downs [in a setup role],” Scioscia said. “We talk about that pyramid of guys getting to the closer [Jordan Walden]. It’s a little broader right now.”

After signing C.J. Wilson and Albert Pujols, the Angels didn’t have much payroll flexibility to fortify the back end of the bullpen. But, that became an opportunity for Jason Isringhausen, who perhaps because of his advanced age and injury history wasn’t getting much attention from other clubs this winter. 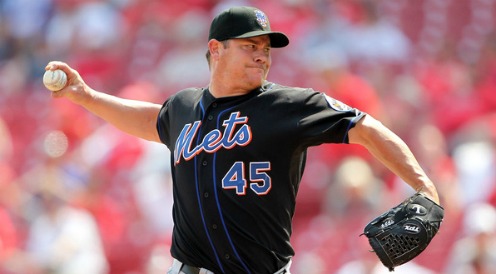 The Endy Chavez Encore and 10 Other Double-Duty Mets

A recent NYDN article indicated that the Mets have “discussed” a reunion with OF Endy Chavez. FWIW, I am in favor of this deal and hope it gets done. One of my reasons for this is that if Endy dons the orange and blue again, he becomes an interesting part of Mets History—players who have had two tours of duty with the Mets.

Technically, this would be Endy’s third go round with the Mets. First he was in their farm system from 1997-2001. He returned and played for the big club from 2006 through the end of the 2008 season before departing to Seattle in the massive three-team, twelve player deal that December.

So how have other encore performances worked out for the Mets? We’re glad you asked!
1. Rusty Staub (1972-75, 1981-85): This is the best recycled player the franchise has had to date. After a four year stint with the Mets where he hit 62 homers and drove in 307 runs, the Mets shipped Le Grande Orange to Detroit for Mickey Lolich after the 1975 season, easily one of the worst deals in franchise history. Six years later, Frank Cashen undid that move and Staub returned to the Mets as a free agent. In 1983, he tied an NL record with eight straight pinch-hits and in that same season also tied the Major League record of 25 RBIs by a pinch hitter. He lasted until 1985, providing veteran leadership for a team on the rise. One of the more beloved Mets, he was later elected into the Mets Hall of Fame.
2. Lee Mazzilli (1976-82, 1986-89): Boy, I seem to blog about Maz often and for good reason: he has a fascinating history as a Met. His first stint from 1976 through 1981 coincided with one of the worst periods in team history. He was dealt to Texas before the 1982 season for Ron Darling and Walt Terrell, a deal largely credited (by me at least) in sparking the franchise’s resurgence. In 1986 the Mets picked him back up on waivers from the Pirates and he played an important part of their championship team. He hit .306 the next year and his career with the Mets continued until 1989.
3. Dave Kingman (1975-77, 1981-83): Dave clubbed 62 home runs for the Mets, some of them legendary, during his first two and a half seasons with the club. He also struck out 344 times in 1,208 ABs, couldn’t field a lick and was a surly clubhouse presence. He was shipped to San Diego as part of the June 15 1977 “Midnight Massacre.” The Mets re-acquired him before the 1981 season for Steve Henderson, another one of the trade principles from that fateful June evening. It was more of the same: Kong hit 52 homeruns and struck out 334 times in 1,136 at bats. His personality hadn’t changed and the Mets were glad to see him go after the 1983 season.
4. Tom Seaver (1966-76, 1983): The Worst Trade in Mets History (a.k.a the Midnight Massacre) sent their Franchise Player to Cincinnati in 1977. (Kingman went to San Diego in a separate deal that same night). Cashen undid that move by trading back for him in 1983. Tom lasted a season with the Mets, going 9 and 14 before being exposed a free agent compensation draft and getting claimed by the White Sox. I will always wonder why the Mets couldn’t have traded a prospect or two to the Sox instead and kept him. Seaver later moved to Boston and created a “what if” scenario, as an injury kept him off the Bosox active roster during the 1986 World Series.
5. Kevin McReynolds (1987-1991, 1994): Forgot this one? Kevin came to symbolize all that was wrong with the late 1980’s Mets and was run out of town in 1991. His replacement was Vince Coleman, who came to symbolize all that was wrong with the early 1990’s Mets until he was run out of town after the 1993 season—to Kansas City for McReynolds. K-Mac hit .256 during the strike-shortened 1994 season and then called it a career.
6. Jason Isringhausen (1995-99, 2011): Nice story last year, but is probably moving on again. His first go round with the Mets is worth a post in itself.
7. Tim Foli (1970-71, 78-79): Ah, Crazy Horse. Traded for Staub and then had his contract purchased by the Mets from the Giants in 1978. Later traded again, this time to Pittsburgh in early 1979 for Frank Taveras; a move that I loved at the time. He helped Pittsburgh win a World Series the next year.
8. Mike Jorgensen (1970-71, 1980-83): Traded with Foli and Ken Singleton for Staub prior to the 1972 season. Came back to the Mets in 1980 with Ed Lynch in a deal for Willie Montanez (not a bad trade!) The Mets sold his contract to Atlanta in 1983 on the same day they acquired Keith Hernandez from the Cardinals. Nice Upgrade.
9. Bill Pulsipher (1995-98, 2000): Can’t miss prospect that missed. Twice.
10. Bobby Bonilla (1992-95, 1999): Hard to believe, but his second stint with the Mets was worse than his first. The Mets are now paying him a million a year until around 2025.

For six innings, this one seemed to be in the bag. After all, the Mets mounted a three-run lead against a team that can’t score runs.

Then, the Padres lined up Josh Spence and Chad Qualls to pitch the tenth inning and once again the game appeared to be in the bag.