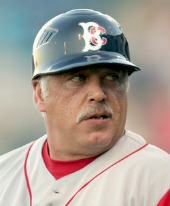 Terry Collins, like any good manager, is thinking a few innings ahead, a few days ahead and a few trades ahead. The Mets manager has begun contemplating what he will say after the big Carlos Beltran trade expected this week.

According to the NY Times Collins said:

One of the young players Collins will address his message to is Bobby Parnell. The future closer’s job is at stake here for Parnell and Collins would like the team to stay competitive. “There’s some guys in there fighting for jobs now,” Collins said.There are also some guys who will be free agents at the end of the year and are looking to impress.

Mets fans can only hope all players on the roster, regardless of future role or team, play hard every game and finish with a winning record.

According to Adam Rubin of ESPN,

Jason Bay (hamstring tightness) is out of the lineup this afternoon. Manager Terry Collins had intimated Wednesday night that he was going to give Bay, who is 4 for his last 37 (.108), the day off.

Bay said he originally tweaked his hamstring Saturday, when he stepped on Ryan Howard‘s foot while running to first base during a victory over the Philadelphia Phillies.

Bay was lifted in the fourth inning of last night’s win.

“Terry was aware of it,” Bay said. “I kind of felt it was OK if I was jogging. I hit that ground ball to short and my first couple [of] steps, I could feel it. I kind of slowed down but there was something that kind of prevented me from really going and then there was a ball down the line my first couple steps again your first instinct is to go real quick, but I could feel it immediately. Not bad, but enough that I’m a little concerned that if I keep going at that pace something bad might happen.”

What else bad can happen to his season at this point?

Ike Davis was asked if he might play again this season before yesterday’s game against the Cardinals.

“I’m not gonna tell you I’m gonna play this season because I’ve told you like 16 times this year [that I will] and it hasn’t happened,” said Davis, out since May 10. “Give it three weeks and we’ll see, either ‘yes’ or ‘no.'”

Terry Collins of course would like to see a healthy Ike on the field this year, to erase any doubts and speculation about his health going into next season.

“I would say the majority odds are I probably wouldn’t play this year. …,” Davis said, according to the NY Post and ESPN “Obviously there’s a possibility that I don’t need surgery. We just need it to heal. And if it doesn’t heal, we have to do something to make it heal.”

Oh no, here’s the kicker:

“But next year I will be back and healthy. I promise.”

Does anyone realistically expect Ike to be back this year?

Jose Reyes‘ baserunning gaffe from Friday night’s game was exactly that: a gaffe. Meaning, a blunder, or a foolish mistake.

It doesn’t matter that Bob Ojeda was a former MLBer and he supported this blunder, because there are former MLBers who, if you asked them, would say it was a dumb move.

And it doesn’t matter that Reyes’ own manager Terry Collins publicly supported Reyes’ decision to take a chance in that situation, because Collins

In an article in the New York Post, Howard Johnson had critical words for Terry Collins and his benching of Jason Bay:

There was a lot of grumbling on Twitter, the blogosphere, and other media outlets about Terry Collins’ decision last night to pinch-hit Chin-Ling Hu instead of Willie Harris or Dan Murphy during a key moment in the game.

I’m not sure about Harris, but the reason why Collins didn’t send up Murphy could have been to “send a message”.